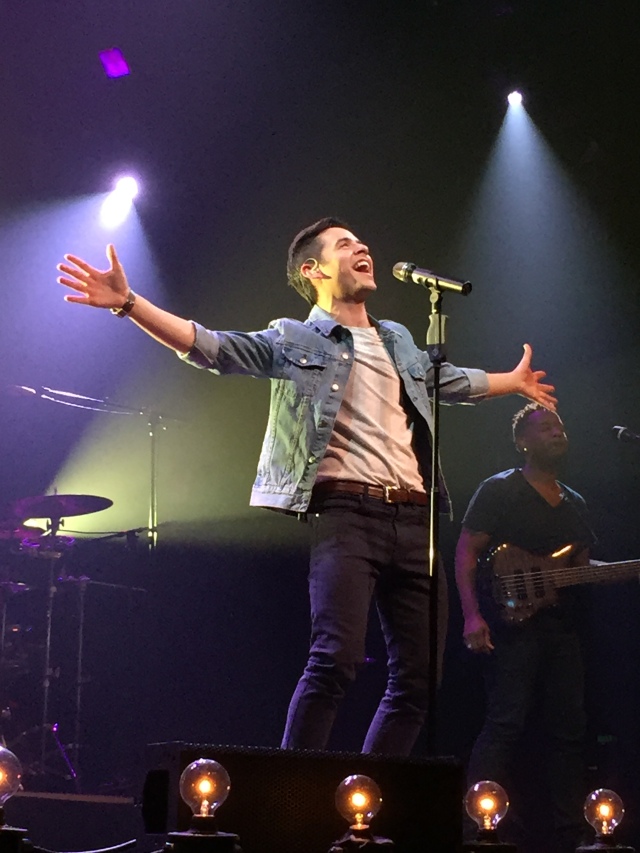 (Disclaimer slash excuse: The lovely and always amazing Silverfox left this comment at the end of the last thread, and I think we all have missed her insightful words so much in Davidland, that I’m posting them below… yes, I should have asked her permission, but instead, I’ll ask her forgiveness.* 🙏🏼🙏🏼🙏🏼)

As I watched David on stage, completely mesmerized and stunned by him again & again, I could not help but think, THIS! This is WHY!

The answer to the questions by some friends and family who wondered why in years past, I went to as many concerts as I possibly could in support of this young man.

I used to wonder how there could be some people who couldn’t see in him what his fans could see. I don’t mean his character, his compassion and his goodness which was obvious to everyone. I’m talking about his “potential” to become the ARTIST he is now.

He was always a joy to watch on stage to be sure, BUT NOW? He is MORE. He has opened the floodgates! He has taken the reins of his life and he is a man who, with his faith to guide him, has reached literally with his new album, for the stars.

With his new found confidence to do what is good & right for himself, he now has the courage to do what he wants, when he wants, and how he wants.

To see this brave new David is a wonder to behold and so very appealing and attractive. Courage to say what you feel to be heard like the lyrics in “Postcards In The Sky” can bring clarity and light to our lives and in David, his light, his aura, is blinding when he speaks.

And then there’s the music. The voice. The emotion.

.
He can make a grown man cry or soothe a woman’s soul, or give hope to a teenager, or calm a crying baby so deep is the emotion he exudes.

And when he rocks? Well, one look at the videos of his up-beat performances answer that question and if still in doubt, one only has to see his ending of ALTNOY or Higher Ground to put any doubts to rest that he is pretty much one of the most E L E C T R I F Y I N G performers today.

This is all you need to see tonight. @davidarchie #davidarchuleta end of Higher Ground #Nashville

.
No need for background singers. His voice is all it takes. Dancers? Ha! HE OWNS THE STAGE when he moves! (Who knew? He’s Latino! How could he NOT have some hot moves!) Pyrotechnics? Nah! David’s inner light shines bright.

Proof is in the first picture above taken by TOfan which is, IMO, one of the most beautiful pictures of David taken by a fan I have ever seen. David’s essence, his joy at doing what he loves is so clear and so beautiful in that picture.

One more thing, David’s IG videos? Can I just say again, WHO IS THAT AND WHAT DID HE DO WITH DAVID? I take offence at him calling David “scrawny”! Small, yes. But a GIANT ON STAGE, thank you very much!

DAVID IS FINALLY DOING AN ACTUAL SHOW IN CANADA, Y’ALL! A CHRISTMAS SHOW TO BOOT! THERE IS A SANTA CLAUS!

The actual ArchAngel Abrra made an mp3 of this incredible acoustic Numb performance, download HERE.

The wonderful @trentdabbs . So here's the story with him: Trent took part in writing 3 songs on the new album with me: "Say Me," "Other Things in Sight," and "Numb." If I'm not mistaken, Trent may have been the first person I met with in Nashville to start writing when I got back from my mission. That first day we met the idea for "Say Me" came about. We needed a little extra inspiration after we had the first verse, and so called up writer/producer Jeremy Bose and went over to his studio to finish the song. The same trio for "Say Me" brought the throwback groovin' "Other Things in Sight." Speaking to Trent that first day helped me realize I could speak about how important my mission was and to keep that change in me incorporated in my life and keep it going. The most pivotal writing moment I've had so far was probably with Trent and producer/writer @jskenney writing "Numb" where I realized I could incorporate those changes not only into my personal life, but into my music. When I wanted to quit on music to stay away from a place that left me feeling so empty before, speaking with Trent and Jamie helped me realize God could be a part of every moment and everything that I did, and there were people like them I could team up with to make it happen. Working with Trent was the beginning of me finding that I could be heard speaking up about what mattered most to me, and that my own voice was important. Thanks Trent for being a positive influence in this journey I've been on the past few years! Thanks for listening to how important spirituality and God being a part of everything I do is to me, and helping me find a way to express that in music. #storytime #postcardsinthesky #songwriting #trentdabbs