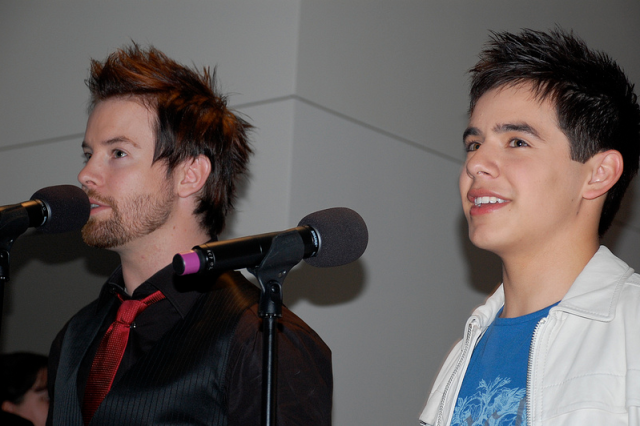 On the last thread, the lovely Ms. Kizzi posted a link to a Jim Cantiello column I’d never read (I LOVE Jamba Jim but only discovered him when he started tweeting). I don’t think a lot of fans have read it either, judging from the number of comments … zero … and we were nothing if not rabid David-defenders back then, lol).

During AI7, I followed Entertainment Weekly’s recaps of the show but somehow missed MTV’s. Looks as though they had a lot of the same misconceptions that EW did. I didn’t get it then and I still don’t get it.

Sure, he seemed young for his age, but in a sweet, genuine way. A throwback to a kinder, gentler time. “Creeped out”?? By what? Incredible singing? An actual humble person in Hollywood?? Someone who isn’t fake or manufactured or swagger-coached???

But if you read Jim’s column, he does make a good point. To some, David came across in person, much more mature, well-spoken and full of personality than he did on the show.

We brilliant people, of course, saw through all the hijinks Idol tried to play on David and watched every interview we could get our hands on, so we saw that maturity and personality in action.

But those not as gifted and insightful as we lot 🙂 needed to be bashed over the head to “get” the amazingness that is David.

So for those who think he has an “image problem,” I say it’s more a perception problem. Ours, not his.

Maybe wider audiences need to be helped along to see the magic that’s right there before their very eyes… and ears. Sort of a “closed captioning for the David impaired.”

(Personally, I’m happy with letting David be David … that sure worked for all of us… and eventually Jim, too. 🙂 )

p.s. Here are excerpts from the column:

Having Survived ‘Idol,’ Jim Can Now Finally Reveal the Truth: David Archuleta Is Not Who You Think!

So I’m back home in NY and finally on a normal sleep cycle. Hallelujah! And even though I had a three-day weekend to detox from “Idol,” I still can’t shake one thing I witnessed at last week’s Grand Finale…

Nope, not Fantasia’s awesome hair. Nope, not the fact that Ruben Studdard was really 9 feet tall in person. Actually, it didn’t even happen on the red carpet. It occurred backstage in the press room, and I call it the David Personality Shift.

The two David’s made their way to a podium to answer a few questions. First came the Cookster, who just 30 minutes earlier was crowned America’s Next Top Clive Davis Slave. We were all expecting him to be over the moon with excitement, or maybe he’d still be crying like he was on TV. (He did, after all, just win a crazy-popular reality show.) But, nope. He waltzed up to the mic, mumbled a few words about his music teacher, then politely smiled and walked off. A few of us turned to each other and said, “He knows he just won, right?” Was it dawning on him that it might be tough for him to break out of the “Idol” mold? Or maybe it just hit him that his first single was a steaming pile of goo? Or, most likely, he was just damn exhausted, and would rather chill with his family (standing backstage waiting for him) than answer silly questions about fashion accessories. (Yes, stupid tabloid reporter who drove everyone nuts. I’m looking at you.)

Conversely, there was ArchuRunnerUp, who haters bashed for his awkward “gosh’s” and giggle fits. Several of my co-workers have been “creeped out” by how he often acted like an eleven-year-old boy, as opposed to a seventeen-year-old dude. Well, based on the few minutes I witnessed in the press room, Archuleta was a shockingly mature, well-spoken young man. He finished all his sentences; he didn’t gasp for air more than John Goodman on a staircase; he didn’t shrug and turn away from the camera like a Harajuku girl. In other words, he came off like the complete opposite he did while on the telly. And he…had…tons of personality! Where was this Archuleta all season long???

Could it be that losing “Idol” was the best thing that could happen to this kid’s emotional growth? Was he just freezing on camera all season because of the intense pressure? (Or was he just relieved to finally get away from Seacrest?)

This entry was posted in Fan experience and tagged David Archuleta was always bettah. Bookmark the permalink.