From TheRealNewangel: Help! I’ve Fallen and I Can’t Get Up! (Or, how I realized there’s no way out of this)

So, the other night I’m on youtube watching David and tour manager Ray duet on “Have Yourself a Merry Little Christmas” for the millionth time and over on the side where they show the “recommended for you” videos, what should I see but my guilty pleasure of all David performances, the very thing that made me realize there was no getting out of this fandom. Yes, I’m talking about three little words that changed my world forever.

Mock me if you will. I’m owning it loud and proud. We all have one or two “what was he THINKING??” moments; yours may not be mine and vice versa. On the surface, this song and video are everything that would normally make me cringe and look away:

3. Teddy bears and hearts dropping from the sky at the beginning of the video.

4. Teddy bears wearing clothes in the recording studio (no, I’m not talking about David).

5. David wearing yet another ill-fitting sloppy hoodie (in his defense Bench hadn’t entered his consciousness yet and I’m sure comfort trumps style when you’re recording).

I remember the hand-wringing that accompanied the debut with certain camps being sure he was finished before he began, doing something aimed at the unicorns-and-Care Bears crowd when we were so desperate for him to be taken seriously by adults. There was outright anger and lots of career and management advice and on and on…

I don’t know what his motivation was. Is he passionate about putting children and teddy bears together to make dreams come true? Did he do it selflessly for charity? Did he get a whopper of a paycheck for lending his voice to the campaign? Is he playing some sort of crazy career-path leapfrog with his idol, Natalie Cole (I did Pink Cadillac, now you do it! Now teddy bear songs! Now MoTab Christmas!)? 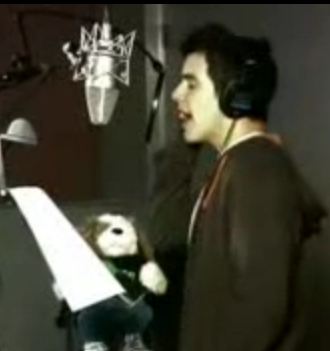 I have no idea and I don’t really care because from the moment the la-la’s start at 2:29 till the end, I’m hooked. It’s brilliant. He’s putting his heart and soul into it as seriously as he’s done with anything else.

If this ship’s going down in a big whirlpool of cheesiness, he’s not sinking with it. The licks, the runs… do I have any idea what the difference is between those words? No. I call it all “fancy stuff.” And, boy, is he good with the fancy stuff. He’s pouring it on without overdoing.

Yes, this song was on my iPod for awhile. I jogged to it. It put a spring in my step, and that’s saying a lot for someone who hates to jog as much as I do.

But most of all, after I survived my first listen and went back again and again I realized something profound. I was stuck and I wasn’t getting out. Like one of those prehistoric bugs encased in amber. As stuck as I was the time my then-boyfriend lost his contacts and I saw him wearing his old glasses from the ’80s with those enormous face-engulfing coke-bottle lenses and I said to myself, wow, I must really love him — we should get married.

And that’s how it is with this fan thing. I’m married to it now. Like any marriage, it has its ups and downs and unexpected twists and turns (hello, Nandito Ako, I didn’t see you coming) and yes, there are still one or two things he could do to make me file for divorce. But I don’t see that happening. I’m committed. Or, I should be committed? I’m not sure there’s a difference anymore.

Q: When did you realize you weren’t going to be able to get out?

This entry was posted in Fan experience and tagged It's all about hugs David Archuleta. Bookmark the permalink.

26 Responses to From TheRealNewangel: Help! I’ve Fallen and I Can’t Get Up! (Or, how I realized there’s no way out of this)