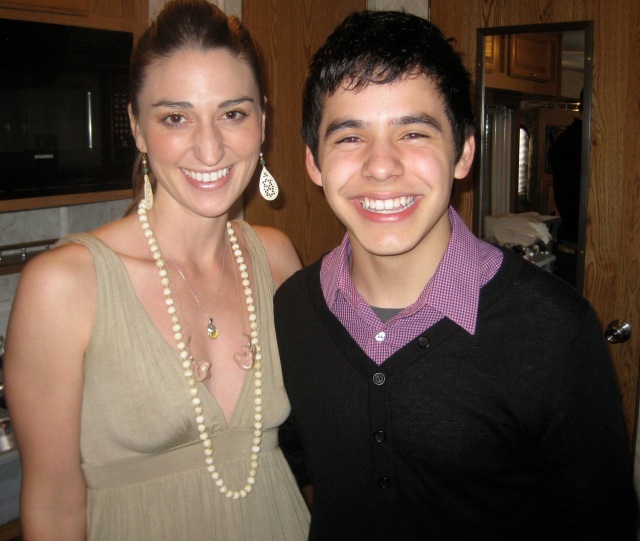 Still wanna smack Jive for not letting them sing together. grrrr

I know I did a previous post about Sara’s video for “Brave” but don’t worry, this blog isn’t morphing into a Sara Bareilles fansite. (Although she is pretty awesome.)

I wanted to post this Idolator story on Sara because it reminded me of things David’s had to deal with career-wise… trying out different styles … getting played on radio… staying true to your voice.

I was going to bold those sections that reminded me of David but somehow I think you guys can spot them too. 🙂

It’s no coincidence that Sara Bareilles introduced The Blessed Unrest (out today, July 16) to the world with the burst of sparkling piano-pop on steroids otherwise known as “Brave”. On her fourth studio album, the 33-year-old expands her musical horizons – freeing herself from the Lilith Fair chains that bound her previous offerings.Sara’s lyrics are still as sharp, insightful and literate as we’ve come to expect from the woman behind tunes like“King Of Anything” and “Hold My Heart” but this time around she creates in widescreen, embracing an unexpected pop sensibility and mixing up her usually narrow soundscape with subtle synths, hand claps and quirky samples.

“I like to think I’m this cool indie-singer songwriter but I’m not,” admitted the UCLA graduate in her Sara Bareilles Makes A Record web documentary. “I am totally a pop person and I love pop music. I just don’t always feel like I fit in.” Funnily enough, not fitting the mould is exactly what makes her an interesting pop star. Embracing individuality is the theme of Sara’s George Takei-approved lead single “Brave”, which apparently documents a friend’s coming out story. Not that you’d know that from hearing it on the radio. This is the most unselfconsciously ‘pop’ track the often earnest diva has dropped since her breakthrough hit “Love Song”. TheMark Endert-produced anthem is an uplifting pep talk set to perky piano-pop. It shimmers with hope and possibility without ever being overbearing. This is throwback to the 1970s when credibility and catchiness were not mutually exclusive.

Bareilles called on Endert to help her create another two potential singles. In her mini-documentary, Sara was refreshingly honest about making tracks with the explicit goal of radio airplay. “I want my songs to be played on the radio,” she said. “But I don’t need a radio hit so bad that I’m willing to do anything for it.” She need not worry. The other Endert co-helmed tracks, while embracing an obvious pop sensibility, stay true to her core musical values and are definite album highlights.

“Chasing The Sun” references her move to New York to start a new life — both creatively and personally. It’s a toweringly optimistic anthem about pursuing hopes and dreams that pulses with the excitement of new beginnings. “I Choose You”, while more standard Bareilles fare on the surface, is one of the most expansive productions of her career. The kooky staccato beats and sprinkling of synths lift the soaring love song to new heights. The pretty lyrics (“Unfold before you what I’ve strung together, the very first words of a life-long love letter”) make the new sound easier to swallow for old school fans.

… The departure might unsettle the faithful momentarily but this is the record that will ensure Sara isn’t banished from the radio like so many serious female singer-songwriters before her.

Have you guys heard Sara’s new record? What do you think?

This entry was posted in Fan experience and tagged David Archuleta you are going to love Sara's new album. Bookmark the permalink.