Am LOLing over the convo in the youTube comments over who has the best hair, David or the guy from 1D. 😆 😆 😆

From Manila Bulletin: DUMAGUETE CITY, Philippines – An apparently exciting addition to OPM’s catalogue will arrive in summer 2013 with the planned release of Jay Durias’ solo album.

The master musician himself revealed so to Bulletin Entertainment, and so far, the process has been nothing short of fun. He took full creative and production control for the album, Jay added, so as to achieve the kind of record he envisions.

With Jay’s track record as core member of South Border, many might expect that his upcoming album would be filled with huge chunks of the hit-making show band’s distinctively smooth and melodious R&B flair. Yet Jay revealed, “Ibang-iba talaga siya. Siguro [ang] familiar lang ‘yung voice ko.” [google translation: “How different he really was. Maybe [the] familiar only that those who voice it. ” … JR, is that close? 🙂 ]

If anything, the album would allow his listeners to learn of his ultimate musical inclinations.

“I’m not really from R&B. I came from progressive music—progressive rock, progressive jazz. Then R&B was there when I came into South Border’s life. [So the album is] a little bit of everything through the years,” he elaborated.

For Jay, it all comes down to the music. He’s not out to compete in such a cutthroat industry challenged by issues on quality, piracy, and foreign market rivalry. While some may debate on the “original” aspect of OPM, Jay’s principle leans on what he calls “Pinoy progressive music.” 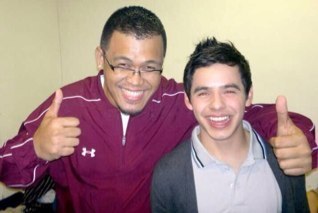 Prior to his solo project, Jay worked with “American Idol” Season 7 runner-up David Archuleta for the latter’s first OPM album. David picked two South Border songs to cover, namely the optimistic “Rainbow” and poignant “Wherever You Are.”

Jay recalled he and David clicking right away when they first met. “Hindi showbiz ‘yon. Totoong tao ‘yon eh, si David,” he pointed out. [“He is the real deal, not just an act. David is a genuine person.“]

He came into the picture as David and his management wanted to explore a different approach for his first OPM single, Ogie Alcasid’s “Nandito Ako.”

This entry was posted in Fan experience and tagged David Archuleta, Jay Durias, OPM, Rainbow, Wherever You Are. Bookmark the permalink.