Great fans do think alike! I’d been compiling my favourite (possibly non-fan) comments from David Archuleta’s new “Something ‘Bout Love” video and WHAMO! Abanana77 and Kizzi were doing the same!

Here’s what we found:

"Loopz™ plays changing patterns of light and music, all you have to do is repeat them by waving your hands through the matching loops ... you can even create your own music!" 🙂 (Pic: David-Daily.com)

Awesome how many views his SBL video is getting. It’s definitely helping promote the song! I was bored and started reading the comments (don’t judge, lol) and I found some interesting ones (from mostly non-fans I think). From VEVO:

I was watching Adam Lambert vids when this advertisement under the screen went “Something ‘Bout Love by David Archuleta Premiere”.﻿ Before Glam, I used to listen to Archie. And because of Archie I met Adam. I’m gonna support Archie’s next album.

i have the jeans he is wearing﻿ at 57 seconds. i got the from the buckle! [LOL]

great song, i’m not a﻿ huge fan but he has a great voice, i love justin bieber and i don’t know why david isn’t as popular as justin

a lot of people say he’s boring yada yada but i don’t think he is. He’s someone that I wouldn’t be embarrased to say﻿ “I’ve gone to his concert” or “I like his music”. Just because he’s not stripping and kissing girls left and right doesn’t mean he’s not a good entertainer.

Am I the only one who thinks David Archuleta looks﻿ like Mike Myers? Lol anyway, amazing song, but I feel the Video On Trial will enjoy bashing David and his videoclip. [LOLOLOLOLOLOL]

first time i have heard this song but i love it already……………..for some reason i used to hate this guy but i got his music﻿ stuck in my head and i love it i listen to it everyday that i live……………:)

omg if the beat and melody of the songs first 5-10 secs dont hook﻿ me i dont like the song, but this song did it, wow 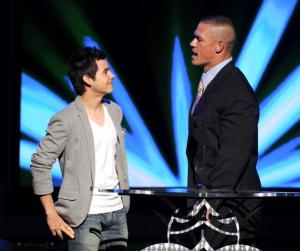 OK I am done now but that kept me entertained for a while. Lalalal

I am getting big chuckles out of the YouTube comments. This from what appears to be a young music fan (I’m guessing over 18 and under 25) from San Diego whose cyber name is 11prepprincess11:

Hello David. Will you be my husband for life and beyond? Yes? That is just fantastic. Because you are gorgeous, and you are amazing at singing and living. Therefore, us getting married will just make life a lot sweeter! Pretty sure God spent a LITTLE extra time on you…

Love you! And this song/video!﻿

… and here are some comments I came across: 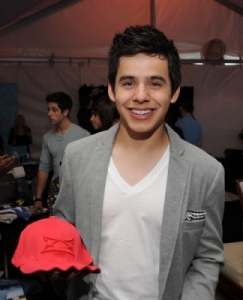 Stick with the Loopz game, D. Step away from the hat. (Pic: David-Daily.com)

Kitwana: Watched the video again. I agree with the Bill Lamb Top 40/Pop Blog comment that spirit of the video matches the song perfectly. It captures both the joy and sadness that comes with love. I think the video is also a great vehicle for introducing an older, more mature David to the public. The first 30 seconds of the video showing a serious and sombre David is a side of him that I have NEVER seen. Full credit to the director for getting this out of him and full credit to David for producing. I really like this video.

tinawina: I think the video takes him out of “cute awkward kid” territory and closer to “nice looking young man” territory. To me, he looked a lot less self conscious, more at ease than on the past. It is shot beautifully IMO. He’s seen at a more mature setting towards the end.. I definitely got college-age vibes from the party.

I do think the video could have been faster-paced. Maybe in the editing? The song is bouncy and hopeful, and the video seemed to drag it down a bit. All it really needed was more energy to me. The product placement is so common these days it almost didn’t even register to me until it went on a little long.

Still, in the end I think it does its job. He looks older, attractive to his age group, and it doesn’t make me dislike the song. I don’t think videos really matter unless they are absolutely fantastic or really distractingly bad. This one is neither, so it’s fine.

chance:  Love the beat. Love the heck of vocal range, especially after key change. I listened to the song the other day while driving at night. You just get soaked in it. There’s something about his voice. The song has fun beat, but still it comes to your touchy emotions. I think it’s because of the quality of his voice; airy, husky, emo, and pure…

And finally, I think this ‘bout sums it up from YouTube: