Can we please talk about how amazing David was on GMA??? 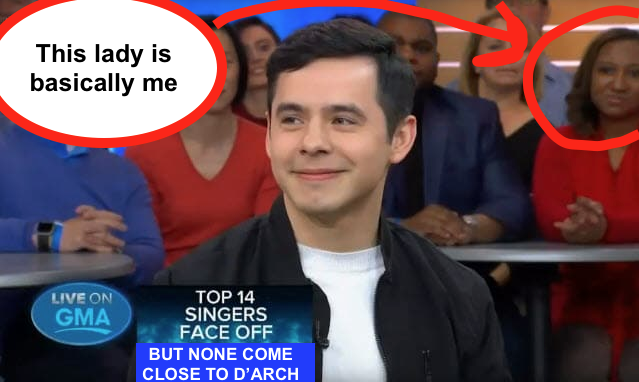 NO ONE on this planet but David could get me up that early to watch TV… totally worth it.

Here are my Top 10 highlights:

1.David on my TV again. DUDES… is that face not MADE for TV? The camera loves him almost as much as we do!

….He sparkles, he glows… well, he always glows but on TV he glows IN HD!

2.He is so eloquent! He managed to get his “elevator speech” about his album, the meaning behind it, his tour, some wise advice for the new crop of Idols, all in just a few seconds… do you know how hard that is to do?? (Impossible for me, but very difficult for most peeps.)

3.That S7 charm was there in full force. Even the FB BTS guy, Rob Marciano, noticed it. David has a gift for connecting with people whether he’s singing or not… and the way he talks to us through the camera… that is GOLD on television… and he does it so naturally and authentically, like he’s just talking to us individually. (He actually was talking to me individually, sometimes you just know. 🙂 )

4.They put the Postcards album on their Times Square jumbotron!!! Not sure why this thrilled me so much… like it was MY album or something, lol… but it was so cool!

5.The BTS segment caught David snacking. I’m sorry, I thought this was classic David and I loved it. And also loved how he turned it all around and shared how he’d been chatting with the people in the green room and even knew their backgrounds. WHO does that??

6.He even charmed the make-up person:

This sweet comment from Andrea, who did David’s makeup for GMA today. The fact that David gets practically a life story from the everyday people he interacts with really says something 💛 pic.twitter.com/Nr9T4A6DUA

7 to 10. He just looked so happy and relaxed and his eyes were twinkling and his outfit looked great and he wore my favourite shoes of his and no he didn’t sing but that means now they have to have him back!!!

How about you guys?? What did you think??

If you only watch one thing from last night’s Dosey Doe show (see what I did there? 🙂 )… make it this one.

Beware the ending though, it is LETHAL!

I’ve watched it a bunch of times now and it takes me straight up through the Milky Way galaxy off to a land where rainbows shine through your eyes and David’s voice salsas through your ears… it’s a good place.
.
Also loved the change-ups on Postcards… man, I love this song!

Postcards In The Sky! @DavidArchiehttps://t.co/ts6OESbklr

p.p.s.
The puppy totally put me over the edge *SOBS UNCONTROLLABLY*

7 Responses to Can we please talk about how amazing David was on GMA???