Amy recaps the awesomeness of Daryl’s House … because she can Daryl’s House was the bomb!

Possibly one of my favorite of all venues I’ve seen David in.

Thanks to my girl, Astrid, for strongly suggesting it the day we met by phone to buy tickets. Having checked it out online, she kept saying…”it looks cool, pretty small, with dinner tables and looks like we can be right up close!”

It was a whole different vibe to be right up to the stage in a dinner club setting listening to David… like in his living room.

So many times during this run, I’d flashback to the Demi tour days, comparing them to the intimate shows David’s doing now. Yes, those days of screams and pounding from big arena rafters for David held their own excitement. Whichever you prefer, I suppose.

Me? I love these intimate shows, and hope they are enough to sustain his “business”… that said, these venues do seem to suit him.

Do you remember the Demi tour entrance? The giant David silhouette behind the big red curtain …heartbeats building to a crescendo…and just before that curtain would come down…a little casual wave from “the silhouette.” ☺ *pang* I loved that wave. I always felt it was his attempt to “keep it human” on that BIG stage, in a far-removed, make-believe world. Now he can just be that guy. ❤

But I’m getting ahead of myself so…

The night before Daryl’s house a snow storm was in the forecast.

Not the first time I’ve had to fight Mother Nature to see David in concert: I was there for “the blizzard of ’09 in Northampton, MA.” (Unbeknownst to me it wouldn’t be the last.)

Luckily, for us, me in CT, Astrid in NJ, we did not get much snow, and by Saturday’s drive all was clear. I feel bad for those people who couldn’t make it due to the storm … my biggest nightmare. No complaints, but just hoping one day David gets to visit the Northeast in our much-nicer spring or summer.

I arrived before Astrid, around 4 p.m., expecting a line outside and that only VIP would be let in early. But VIP was already “in process” and people were just walking in.

Daryl’s House is a rustic, funky, and cool music supper club. The powers-that-be were organized, friendly and helpful, and the hostess at the door was checking in people and having us choose our tables. I was excited when I was able to get a two-top right up close to the stage, only one other table in front of us. THIS was going to be the closest I’d ever been!

Astrid was running late because, as she had texted me the hour before, “Hubby has decided he suddenly wants to come … what the whaat?!” and that she was “on Twitter in search of an extra ticket!” Penny aka Dang-it-David, came to the rescue again (in my Hartford recap you may recall it was her VIP ticket I unexpectedly received). Deb & co. still had Penny’s ticket for this show, so it became Fernando’s. Thanks again, Penny!
Astrid keeps saying that one of the “stories” of this tour is: (her exact words) “the mens are coming out!” 🙂
We’d often lamented to each other that our significant others would likely not be going to any concerts with us, even though both have always acknowledged David’s talent.

Mine has traveled with me to many a show yet not gone to the show itself…just didn’t think it was “his thing.” Though I will say he listened to the Postcards in the Sky album on the way back from Sellersville and was very impressed, saying he thought it was his best work to date, and “why isn’t this kind of real talent on the radio vs. the *stuff* (not his exact wording), that is?!”

Perhaps it’s “safer” now. David’s a grown man, not some tween boy the wives and daughters are going crazy for (ok the first part of that’s right 🙂 ), or some Disney/19 Entertainment pop creation they shun? The mixed demographic has been noticeable to many this tour, and it’s really neat to see. It’s all ages, genders, families, couples on date night, and yes, still a healthy amount of young, screaming women. Yay, David.

So, along came Fernando, or “Fernandita”, as we nick-named him after my phone “auto-corrected” his name to that, and if fits, since he earned his “fan-girl” stripes that night. 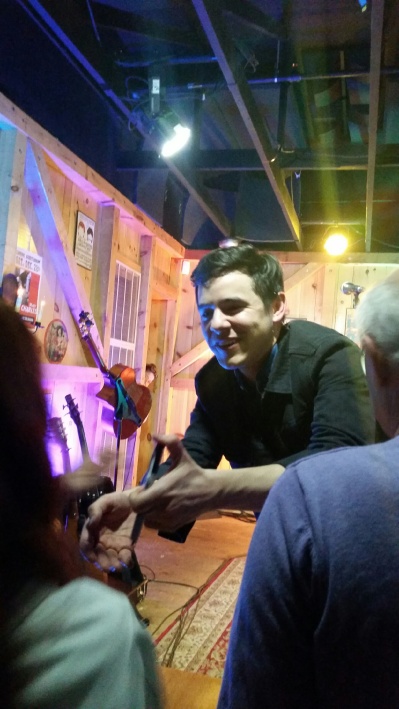 He was bit by the Archulator, a phenomenon we witnessed around the room. For proof of this, you need only watch the Live-Stream from that show (btw, THANK YOU Daryl’s House!)

Check out “the lucky table” [the couple David chatted with right up front, Anne and Joe) and Joe’s friend sitting behind him and I’m sure you’ll “understand” that plastered-on smile he had throughout the show. And, I’m not sure the camera caught this but, as David was hand-slapping his goodbyes to all, I’d LOVE to know what it was Joe was so earnestly telling him, though I saw David saying, ”Ohhh, thank you, thank you so much.” And the dad in front of us, with his wife and daughter, who David sang directly to during the show, after which she collapsed, head on table, crying tears of joy, had only warm things to say after the sho

I know, I know…he’s always had lots of male fans too. Perhaps around the world more than the U.S., as the sensibility is different among male cultures. It was just nice to see a mixed blend of music-loving peeps at these shows.

The show itself was great, great vibe, sooo close. You could see David was having fun. I’ve lost count how many times I’ve watched that Live-Stream, though my pal Astrid could tell ya, she’s keepin’ count on me.

Some random things: Marlie7 and her DA travel pal, (darn, I forget, but I think Susan?), wound up sitting next to me again! I had met them in Sellersville as they had sat behind me. It was nice to chat with them again.

Also, when you watch the Live Stream… watch for David’s story about going on his mission. The way he says “It changed my life y’all!” with such heartfelt, open vulnerability… gets me every time.

Lastly, for the first time, I got to high-five him during his goodbyes from stage…in my enthusiasm and excitement; I think I whacked his hand way too hard. Note-to-self for next time: #savethepianohands

Got an email from Astrid a few days after the show saying how impressed Fernando was, that he LOVES Numb and Postcards, which he asked her to play on the way home that night, and has been “going on for days about how it should get radio play.” He apparently played them for a co-worker that week.*

All in all, such a wonderful night and show…and an awesome venue I hope David & Co. come back to. I also hope that Live-Stream stays up forever! 😉

*Deb’s footnote: After the show, Astrid’s hubby, Fernando, asked us if David wrote Postcards and we said yes and he just kept saying, “that is a GREAT song” … and “why isn’t it being played on radio??”… I mumbled something about David being an indie artist and you need the big bucks of a label to get radio play… it’s criminal, I tell you!

[I will also add that David definitely turns it up a notch if he’s on TV or a livestream… I saw it happen when Billboard livestreamed his Christmas show back in the day, and I saw it at Daryl’s House… several songs gave me actual full-body chills because of that high burner he cranks up… wow. Also, the VIP that night was also something else. It was in this tiny room filled with Gingerbread Houses, that he mentioned right off the bat. And he answered every question in such a thoughtful, spiritual way, he actually joked about it… that he was “taking us to church”… he said that ultimately, he does hope his music helps people feel closer to Christ, but that even for people who aren’t religious at all, his goal is to uplift them and help them connect with something bigger than themselves, whether that be nature or their inner purpose… it was really special, I’ll never forget it.]

Here’s the VIP Forevermore recorded by the lovely & amazing djbell: