A Magical Holiday Night in Calgary

‘First Solo Show in Canada!’ … D A V I D at the JACK SINGER CONCERT HALL, oh my heck.

My home town did me proud, I must say!

When TOfan sent me the news that David was coming to Calgary to do a Christmas concert I shook my head in disbelief.

No way, she is teasing me, I thought. Facts came to light and I quickly put on my thinking cap to figure out how I could promote The Concert. I bought Postcard in the Sky CDs thinking I would hand them out to the local radio stations etc…

Well, tickets sold very quickly in the lower front sections and even the front of the side balconies. The remainder of the Jack Singer sold steadily over the following three weeks. I would say that, while it was not a sellout, it was close. I, therefore, had nothing to do – lol – and have since gifted the CD’s I purchased! 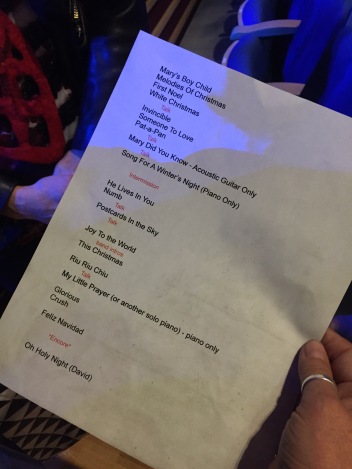 Highlights of the Concert

David sang 20 songs. Who on earth sings 20 songs at a concert? David of course!

From the very first song, when he hunkered down during Mary’s Boy Child with his fist punching in the air for the chorus — ‘Hark, now hear the angels sing, a king was born today’ — I knew we were in for a great concert but I wondered how in heaven’s name could he keep up the energy??? I should have known better, lol.

Here are my point-form thoughts about the other songs:

– Invincible – what can I say, it hits home for me

– Reverent Mary Did You Know

– Of course he would find a Canadian written song (Gordon Lightfoot) to sing – Song for a Winter’s Night. Despite the nervous errors it was beautiful!

– It was so obvious in David’s face how disappointed he was in himself after forgetting some of the words in Song for a Winter’s Night. My heart ached for him and I wish I’d of had the presence of mind to stand up and call out to him ‘thank you David for introducing me to a beautiful song I have never heard before’.

– Singing Postcards in the Sky with such FREEDOM

– The hush of the crowd right after he finished My Little Prayer was eerie. Then, the eruption of applause. Chilling. Such emotion in his voice. More tears – my son reached for my hand and held it tight during this one

– O HOLY NIGHT – Sublime. David reached right into my soul. The entire audience rose to its feet to show their love.

– David is an honourary Calgarian now!

– The audience remained on their feet during the entire presentation.

– You all must know that this is NOT something done for just anyone. The group of people that lobbied for David to sing here in Calgary also requested Tourism Calgary to present the White Hat to him. They could easily have denied them their request.

– I was thrilled when they told David that “we had high expectations, but you exceeded them!”

Here are some of the post-show reactions from my friends and family who were there:

– “Great performer – commands the stage” … this from my son who told me that he wasn’t a fan but would come to the concert to watch my reaction. Said he ‘had fun’ and ended up downloading Postcards in the Sky!

– “He has a BEAUTIFUL voice – innocent,” said one family member.

– “Great voice – pitch perfect, but a bit rambly,” said another.

– As she was walking out of the theatre after the concert, I heard one young woman (an accomplished singer in her own right) say she was ‘blown away’ and then she ran to the merchandise table to buy a t-shirt and CD for her mom for Christmas

– “Wonderful concert – has the most soothing voice I’ve ever heard” said another friend.

– It was the first time that one of my friends had seen David live – and she told me, “He was soul-touching, exhilarating. He doesn’t even know me and he gave me faith in myself and validated my worth. Truly an inspirational young man.”

I must say that it was very special to have my kids at the concert. They have supported me in my David Journey with some bewilderment, but supported none the less.

David concerts have become a wonderful experience sharing with old friends (thanks TOfan and Refnaf), renewing acquaintances (Pastel and her lovely friend and new fan Peggy) and meeting online fans (the most gracious Pepper) for the first time face to face!

It is a night I will never forget.

TOfan EDIT: The snowflake-y picture up top was handed out by the ushers and this was printed on the back (I’ve underlined my fave bits… that just seem so Canadian to me, idk 🙂 ):

.
p.p.s.
okay, so this is a ghetto video clip of someone else’s private video clip so please don’t share, I just wanted y’all to see a bit of the soulful deliciousness of Someone to Love from Calgary… still praying someone foiled the super-stringent camera cops and got more video: