Miracle at Red Rock by Taterzen 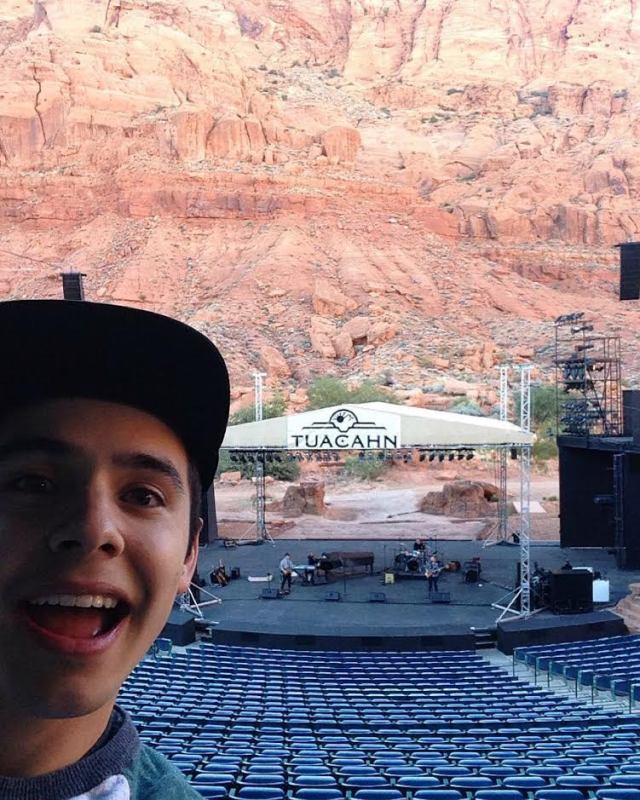 A big THANK YOU to the lovely and amazing Abrra for sending me a version of this pic with “Tuacahn” spelled the right way around! 🙂

I have been happily lapping up the David Archuleta concert recaps from Tuacahn and Midland. I take seriously the blessed opportunity to relive those performances through the eyes of others. When David began his series of shows in mid-September, he called them “warmup concerts.”

I wondered about that terminology because it never sounded to me like he needed warming up. Credit to David though, he knew what he was doing; and he was so warmed up by the time he got to St. George, he caught on fire. Suffice it to say, the audience was summarily toasted.

You all know how things went at Tuacahn, but I have a side story I want to share. Yep, this one is all about me. I see some of you nodding off already, but David plays a part here, so hang on. I have to begin by going backwards (kind of like my real life). I have mentioned the facts below before, but they are pertinent to what happened in November of 2015.

My first opportunity ever to see David live was in 2009, in Idaho Falls. I persuaded my husband to go with me. He had declared himself to be a “fan by marriage,” but that was about it. We ended up in the second row. I was pleased, but hubby immediately discerned that he was sitting directly in front of a ginormous speaker.

David’s opening act was an Irish rocker. When she began, that giant speaker delivered, and what may have been Irish banshees behind us began to shriek. My husband turned to me with a look I won’t describe because I will start laughing all over again which wouldn’t be nice. Let’s just say that he and I have been married for so long, I can actually hear the expressions on his face. They said, “Who is that? What is going on and why am I here?!?”

The audio bombardment nearly had my husband in a fetal position before David even took the stage, and on the way home, hubby submitted his resignation as a pop concert attendee.

Fast forward to 2015 and the concert announcement in Tuacahn. We have grandchildren in Las Vegas and extended family in St. George. I convinced my husband to head south, and in record time I might add.

Miracles for this unrequited fan began to unfold during the first concert held amidst the beautiful red rocks. My husband seemed to be engaged with David from the get-go, watching, listening intently, smiling from time to time. He joined in heartily with the crowd in their gloved/muffled applause. He was impressed, extremely impressed, and we talked about it for some time afterward. What had he not heard before now? I was not about to question him. I just knew he was suddenly a big fan of his own volition.

I had two extra tickets for the next night, and my husband actually sold them to a contact in St. George while I was at the fan luncheon. I have no doubt that his new appreciation for David’s talent and his sales skills did the trick. He sold them for full price.

My aunt and uncle who reside in St. George had tickets for the second night and we drove them to the venue. I love these people! They are both 87 and have been married for 68 years. They get “togetherness” and they do it well. They stood to dance and clap at every invitation David offered and were so happy to be there. They could not quit talking about his talent and his charismatic demeanor. Score 2 more.

After the concert, we drove to my aunt and uncle’s home for hot chocolate. My cousin Susan (their daughter) joined us. She and her husband had been at the concert too. I have always been a little suspicious of Susan. She is a mother of 8, a grandmother of 21 and doesn’t look a day over 40. What kind of women do that? My suspicions dissolved instantly when she began to gush about David. What was going on here? Turns out she adores everything about David, especially his voice. Who knew? Why had we never gotten together for some communal gushing? And the night wasn’t over. Susan talked about her grown children who are big David fans. Several of them have every album David has made! I was completely flummoxed and totally lost track of the scoreboard in my head.

16 Responses to Miracle at Red Rock by Taterzen