What an amazing time to be a fan!!! *flails*

SPAZZ ALERT #1
WE GET A BRAND-NEW ADELE SONG TOMORROW!!!
“The album’s debut single, ‘Hello,’ will be available to purchase and stream on Oct. 23”
.

In a musing on aging posted to social media, Adele has announced that her long-awaited new album will be titled “25,” following the tradition of her first two releases, “19” and “21.”

Named for the age she was while writing it, “25” will be released on Nov. 20 via Columbia in the United States. The 11-track album comes close to five years after “21,” which sold some 30 million copies worldwide and won seven Grammys. The album’s debut single, “Hello,” will be available to purchase and stream on Oct. 23; a video for “Hello,” directed by Xavier Dolan and shot near Montreal, will also be released that day.

“My last record was a break-up record and if I had to label this one I would call it a make-up record,” Adele, 27, wrote on Wednesday. “I’m making up with myself. Making up for lost time. Making up for everything I ever did and never did.”

The singer added: “Turning 25 was a turning point for me, slap bang in the middle of my twenties. Teetering on the edge of being an old adolescent and a fully-fledged adult, I made the decision to go into becoming who I’m going to be forever without a removal van full of my old junk.”

The music was first teased on Sunday, in a commercial during “X Factor UK” that provided a preview but few details. “Hello, it’s me,” she sang in the clip. “I was wondering if after all these years you’d like to meet/To go over everything/They say that time’s supposed to heal you/But I ain’t done much healing.”

In her open letter, Adele concluded, “25 is about getting to know who I’ve become without realizing.”

“And I’m sorry it took so long, but you know, life happened,” she wrote.
.
Teaser:

After giving new life to Full House, Arrested Development and Mr. Show, Netflix is once again in talks to revive another beloved series: Gilmore Girls. Actresses Lauren Graham and Alexis Bledel, who portrayed the mother-daughter duo Lorelei and Rory Gilmore on the dramedy series, are in talks to reprise their roles and return to Stars Hollow for the Netflix series, which could go into production as early as next year. The series originally ran from 2000 to 2007.

According to The Hollywood Reporter, the Netflix revival would feature four 90-minute movies as opposed to the conventional 10 to 12 episode order. Although the WB/CW originally aired Gilmore Girls, Netflix had firsthand evidence of the show’s enduring popularity, as reruns were a “strong performer” on the streaming service.

In addition to locking in the lead actresses, series creator Amy Sherman-Palladino will also return to the fold with the revival; a contract dispute prevented Sherman-Palladino from working on Gilmore Girls’ seventh and final season, and her participation in the revival would bring a sense of closure for fans.

Even Ellen is excited!!!

WE ARE GETTING NEW DAVID ARCHULETA MUSIC SOON!!!! THIS IS NOT A DRILL!!!! 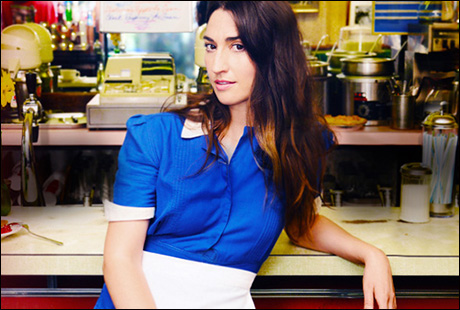 .
The album features Sara performing songs from the new Broadway musical she composed.

“I fell more deeply in love with the writing of the musical Waitress than I had ever imagined,” Bareilles said in a statement about the new album. “It proved impossible for me to imagine handing over the songs to the show before selfishly finding a way to sing them myself.”

This is the first song I’ve heard from it (it’s been released as a single) and I dare you not to burst into tears. Stunningly beautiful.

p.s.
Anybody catch this?

Promoting the event Luz De Las Naciones that starts tonight and goes Friday and Saturday as well. Had a nice interview in Spanish with Positivaradio1490.com this afternoon. Check out the website if you'd like to hear it. Come to the show at the Conference Center in SLC!! Anyone going?? 😉 #luzdelasnaciones #speakingspanish #spanish #sharegoodness #positiva

oooooo, here’s the link on Periscope … it’ll be up for 24 hours, GO! 🙂
https://www.periscope.tv/w/aPkpoDMzNDY4NjZ8MWt2SnBOamJBWk9LReY6vwjWSDwWnbMP_MKwCqwMI9eLmYoyUvxk1imHaXAN

.
I don’t know why but I can’t stop staring at this picture. The contrast. Like a grizzled older dude who’s lived, you know, is looking in the mirror at his younger self. To back when he wore his first cap and it took over his head and made him look 8, except that he was 8. Back when his eyes were bright and hopeful and he glowed the glow of those with a pure heart. Back when the world was his oyster, which thrilled and terrified him at the same time. And there’s a #food tag so you know they gave David snacks, which makes me happy.

15 Responses to What an amazing time to be a fan!!! *flails*