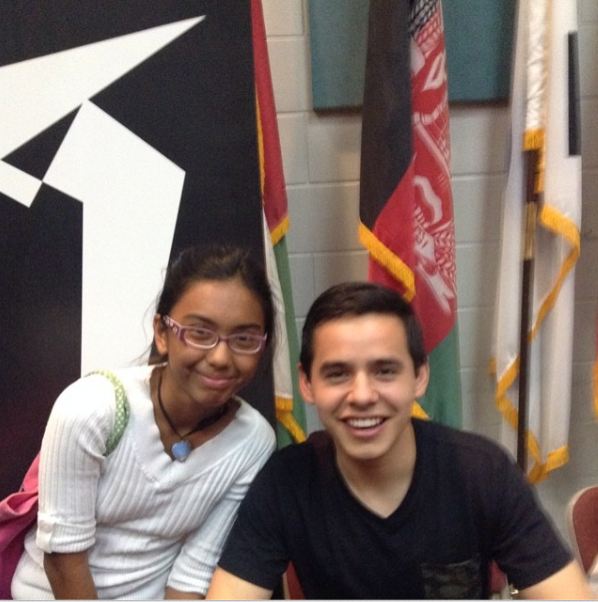 “@KimboNation: Me and the famous David Archuleta from American Idol! ☺ pic.twitter.com/9GCsWRa0Sz” < GREAT picture! Thanks for sharing! 👍

@mlpb3 very! He was nervous on stage it was so cute lol

And from Jason Hewlett’s amazing blog (I won’t post the pic of D. sleeping ‘cuz, well, you know): 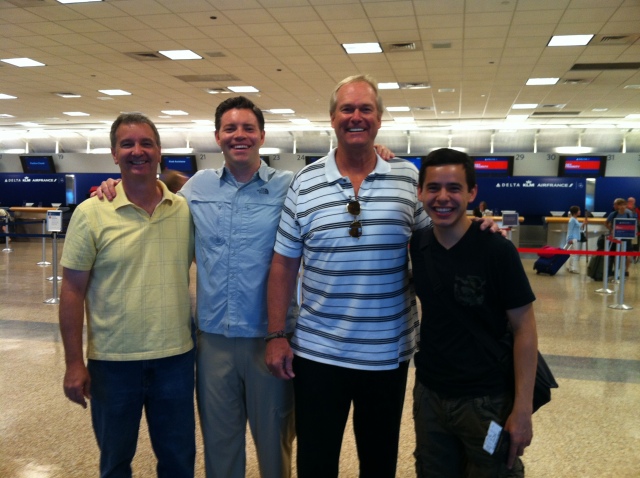 Yes, after 40 hours of flying we arrived at our destination, only to be held up at Customs for never having been there, and then being told our luggage hadn’t arrived. This is a custom I have practiced for many years on Delta, thus my reasons for not having checked a bag in 3 years since they lost my $10,000 worth of costumes on a direct flight to Las Vegas years ago. I apologized to everyone, since I checked a bag and cursed our luggage 🙂 Remember, Delta stands for:

Hoping we get our gear, we are all in the same outfits now for 60+ hours. Stinky! But the shows must go on, hoping Dean gets his keyboard, but luckily he’s a genius and can figure out all of the songs for David, and as we all know, David can sing the phone book anyway.

Also, I have been informed that I am NOT allowed to post where we will be going, only AFTER the fact, so I apologize to anyone following and hoping to catch us on this tour. Obviously, this is not a secret we are here, but needs to be a secret where we’ll be, in order to protect all involved as well as the Troops. Thank you for understanding and still following. It will be more like a 5-minute delay watching the Grammy’s rather than seeing it LIVE, which as we all can agree, is probably the best way to run things nowadays.

Love you all! Thank you for your kind words and comments on the Blog Post regarding our travels here. It’s been a wonderful trip so far, we have been treated incredibly well by all those from this country and ours. Beautiful hotel, incredible food, I accidentally gained 18 lbs on the flight over.

Enjoy videos of our trip posted on my Facebook Entertainer Page

With little sleep, no bags or luggage, confused and dazed, we had an incredible First Full Day on our Tour in a fascinating place: Bahrain.

It was so hot my face fell off the second we left the hotel.  I think it was between 120-130 degrees today.  I didn’t dare ask for fear that my skin would  retreat from my body.   Literally, my face just melted right off, so gross, people were screaming….

And then I realized they were screaming for David Archuleta, who was walking innocently behind me.  It’s like Beatlemania with him.  Man, this guy is popular everywhere in the whole wide world!  Not sure if anyone could be more deserving of success and adoring fans than David, he’s a legitimately kind, spiritual, determined, talented, and calculated person.  I’m learning a lot just being around this kid (I call him a kid because I’m like an old man compared to his youthfulness, and to me it’s a term of endearment.  But let’s be real, he’s now a man and even requested a razor at the front desk of the hotel in order to shave his manly beard growing in, since DELTA lost our luggage.   I offered my razor but it still had some coarse back hairs stuck in it and he started crying….not really but that would be hilarious).

This morning we went shopping for Ramadan appropriate clothing.  Dean and I looked on as Dan tried to find clothing for his 6’5″ frame in a country where he’s considered the same size as a camel.  David found a nice outfit for the show tonight and looked dashing.  Dean and I went with our clothes from the flight over, day 3 for these bad boys, once I got back to the hotel I took off my shirt and it ran away across the floor.

And he’s answering questions on his blog!

“David is well, we go on stage in a few hours, his voice has been heard in elevators and through the airports as he hums along working on a few new songs to perform tonight.”

“David has fans worldwide, even the front desk of the hotel in Bahrain had his song playing on their ipod as we checked in! They didn’t know if it was really him on the list but freaked out when we showed up. Really cute. We will hope to spread joy and love to all we meet.”

P.P.S.S.
Hope you guys don’t mind but I’m just going to keep adding to this post… no point in blogging while Jason’s around! LOL … Seriously though, I love that he’s sort of taking the pressure off of David fan-wise by sharing so much of what it’s like to be on their tour for the U.S. troops… he’s been great about responding to fans (does he KNOW what he’s gotten himself into??? 🙂 ) so maybe peeps will give David a break , you know?

Thanks to the lovely peppertara, snippet of “Bring Him Home” HERE … gahhhhh. And THIS from the also lovely TheRealNewangel:

This pic is from Jason’s latest blog HERE … loved this: “We … feel we are making a dent in the often hurting lives of those who enjoy our show” *sniff* … I sure hope David knows that he does that every single time he sings anywhere. 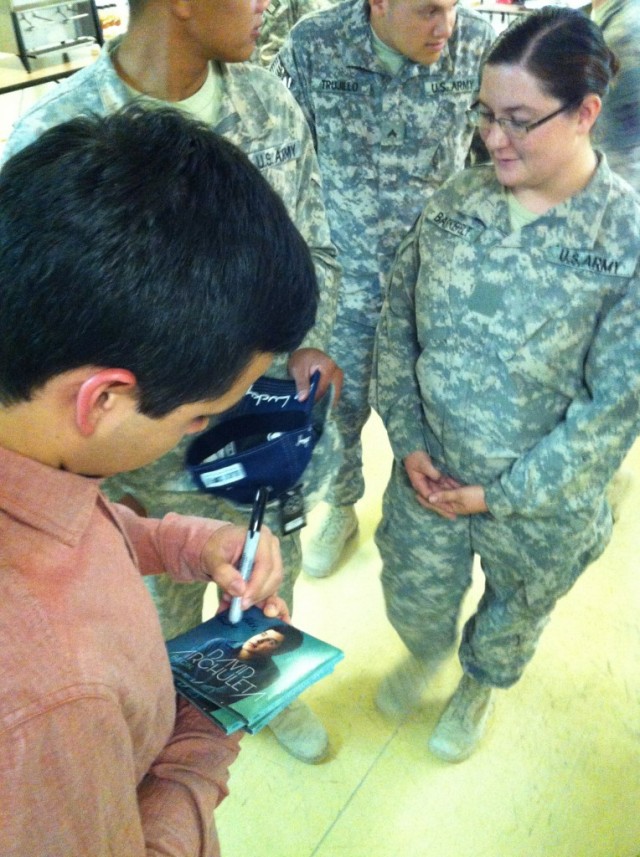 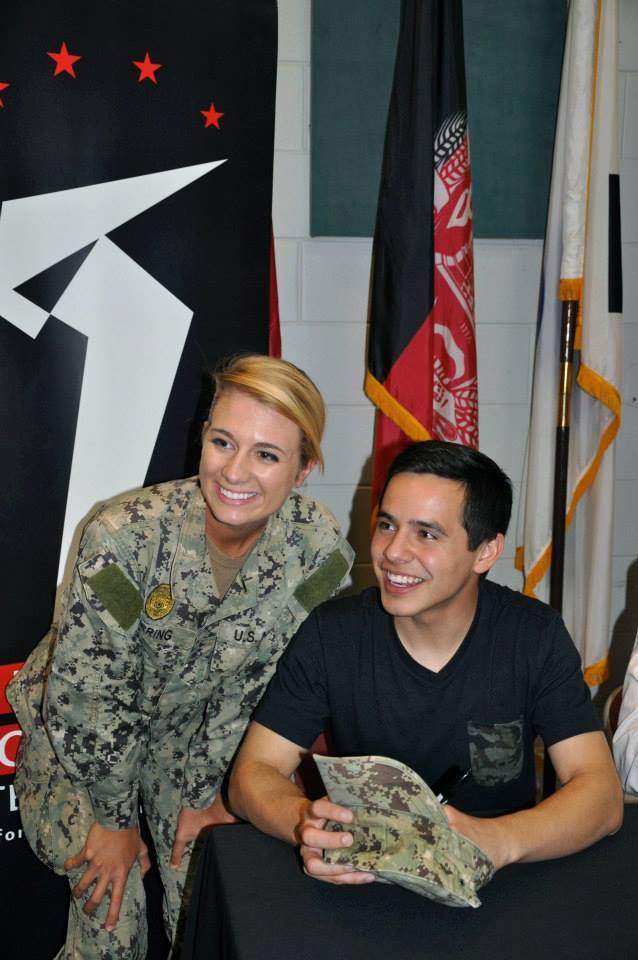 This entry was posted in Fan experience and tagged David Archuleta globetrotts bettah. Bookmark the permalink.

29 Responses to @JasonHewlett for President!!!!