@DavidArchie: “A true fan of the fans” 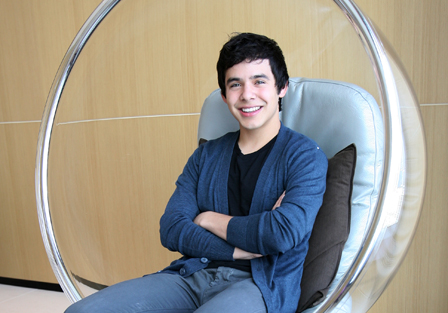 I apologize to one and all for being M.I.A. Just got home (well, work) after four aMAZing days and nights and will fill you in on highlights forthwith (withforth?).

In the meantime, love this interview (done in Hong Kong, judging by the groovy bubble chair) … especially what David says about his fans. A sentiment he’s repeated multiple times in these first four MKOC Tour shows. *sniff*

Leon Lee has a chat with the remarkably down-to-earth pop idol David Archuleta.
By Leon Lee

On the night of May 21, 2008, America was perched on the edge of its seat as it waited for the next American Idol to be announced. Would it be the hard-rocking David Cook or the 16-year-old crooner David Archuleta? Most predicted Archuleta would triumph, so Ryan Seacrest reading out Cook’s name came as something of a shock. But far from being disappointed, Archuleta was thrilled just to be in the finale in the first place.

“I like … experiences that exceed my expectations or other people’s expectations. One of them was being at the finale of American Idol,” says the soft-spoken pop singer. “I did not expect myself to be there and so to actually be there, live that moment and take it all in, I realised all the work that I did that brought me there.”

Although he came in second, Archuleta’s likeability and humbleness, not to mention the musical talent displayed on the show, have led to a promising music career and won him a legion of die-hard fans.

Fast-forward three years and three albums, the now 20-year-old shows none of the negative effects of being in the music industry and still retains his down-to-earth, boy-next-door charm. At times during his interview with Young Post, his attitude showed he’s still accepting his own celebrity.

“I appreciate my fans so much. It means so much to me, all that they do. It’s so hard for me to understand how they are so passionate. I wonder, ‘What did I do that made them … so supportive?’ I certainly never thought, ‘What can I do to get people to become passionate fans?'” he says. “I just went about doing what I did. It makes me in awe just to think they would be so supportive, that they would follow what I do, they would listen to what I do, and be interested in the work that I do. I feel very blessed to have the group of fans that I have.”

While Archuleta remains the same lovable and honest person from Murray, Utah, his music has matured. He shows a darker side on his newest single, Wait, included on the Asian Tour Edition of his third album The Other Side of Down.

“Wait is a little different than the stuff that I’ve released lately. The last album that I did, it was more about trying to be positive and dorky. With Wait, it was more of an emotional song, a sadder song,” he explains. “It’s … almost like a dream. You imagine you see someone that’s no longer there, someone who left you. You want to keep them there but you realise they’re not there and they’re gone. It’s that sense of when you lose someone.”

If there’s anyone that knows how to deal with a loss the right way, it’s Archuleta.

P.S. If you’re wondering about the tag … those exact words were overheard by Ms. Kizzi at last night’s Stroudsburg show… exclaimed as a compliment by a burly male fan. 🙂

This entry was posted in Fan experience and tagged David Archuleta is a beast!. Bookmark the permalink.

8 Responses to @DavidArchie: “A true fan of the fans”