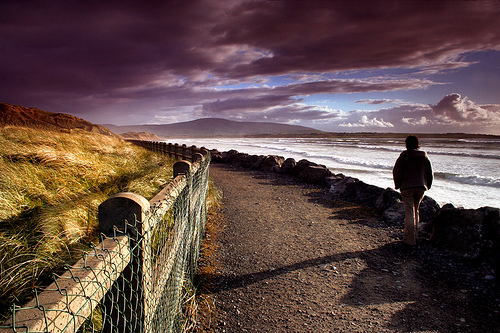 Okay, so I don’t really know where to start with this. I was pretty surprised when I was asked to write something for the site. I honestly didn’t think anyone would really be interested in my story, not to mention I’m not a very good writer.

I tend to ramble a lot and get easily distracted so I start going off topic (and I swear I’m not just saying that to make myself seem more like David, it is the absolute truth) but I thought it might be fun to give it a try so here it goes :).

So I guess I should tell you a little about me first. Well my name is Justin, I’m 16, and I’m from Ireland. Music is one of the biggest things in my life, I’ve played guitar since as long as I can remember, and not too long ago I started teaching myself to play piano. My favourite bands are OneRepublic and The Script, and of course my favourite singer is David Archuleta. My favourite David song is definitely Touch My Hand. I just love the idea of the song, and I also love his live cover of The Riddle. 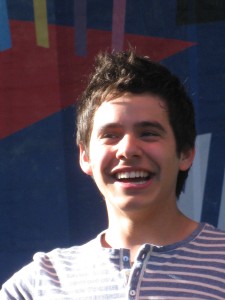 David at Six Flags New England, captured by the one, the only djxox.

I’m a pretty new Archie fan, the first time I actually “discovered” David was when he was being interviewed live on the red carpet for the Teen Choice Awards this year. I had always kind of known who David was, I knew he had been on American Idol, I knew what he looked like, and I knew he had a song called Crush, but that was pretty much it. I had never heard him sing, I had never seen him being interviewed, but when I did something in my head just clicked.

I don’t know what it was, there’s no way to really explain it, but I just couldn’t forget about this random guy. He was just one of the many people I had seen being interviewed and yet he was the one that stood out to me.

So I headed over to YouTube and searched “David Archuleta interview,” (for some reason it didn’t even cross my mind at that point to go and listen to his music), and I chose one of the videos that came up “David Archuleta 108 sec Interview Q A with Kiss 108 FM,” which is now the video I show first to all my friends when I’m introducing them to David’s awesomeness.

Somewhere along the way I stopped with the interviews and went looking for the music. Like I said before, I had heard of Crush so I went with that first, and I thought “Wow, not only is this guy an awesome person, but he also has an incredible voice.”

So I went and listened to Idol performances, live performances, eventually I was looking for anything and everything I could find about him from his personal vlogs, to fan-made montages of his funniest moments. I became officially obsessed with this guy, something I had never expected would happen to me with any celebrity, let alone a guy!!!

And I have that guy to thank for so much. My love of music has been taken to a whole new level, something I didn’t think was possible since I already loved music so much. I have connected to so many people from all over the world, and it’s awesome to hear their stories and experiences with David and there are countless other things that have changed about my life. 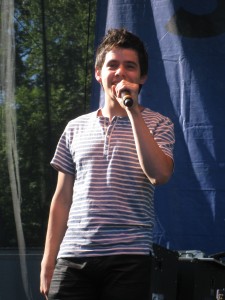 So I guess now I should talk about what it’s been like for me being a David fan in Ireland. Honestly there’s not much to tell.

Here in Ireland, he’s no more famous than I am. Chords of Strength was released here on Thursday, so I went into town to buy it. First book store… nothing, next store… nope, and while there I also checked their CDs just out of curiosity and found they didn’t even have his music!!!

Finally, I found one bookstore that sold it, but you had to send away for it because they don’t keep it in stock. Honestly, I was embarrassed to live here after that experience.

After “discovering” David, I went crazy and started asking everyone I knew if they knew who he was, and much to my disappointment, the answers ranged from “No, who’s he?” to “Oh, isn’t he that guy who was on American Idol years ago or something…?”

The closest thing I got to a proper yes was when I asked an 11-year-old girl (yes, I even resorted to asking children) and she said “Oh!! That’s the guy who was on an episode of iCarly one time!!!” But, sadly, she knew no more than that.

For now I’m okay with that — I like being able to say I like this guy because he spoke to me, not because I heard everyone else talking about him and I just decided to follow the crowd.

But I do hope he will eventually become popular here. I’m often selfish about things I like and I don’t want them to get too popular because it feels like people are taking what’s mine away from me. But I think David deserves to be known everywhere, his voice should be heard by everyone, so that they can find the same joy from listening to him that I have. Not to mention if he never gets popular here, he’s never gonna come here, and he just has to come to Ireland someday!!!

But seriously I do hope to meet him one day, so I can tell him what he’s done for me, because honestly he has already done so much more for me than some people I have known my entire life will ever do for me, and I hope he will continue to do that for many years to come.