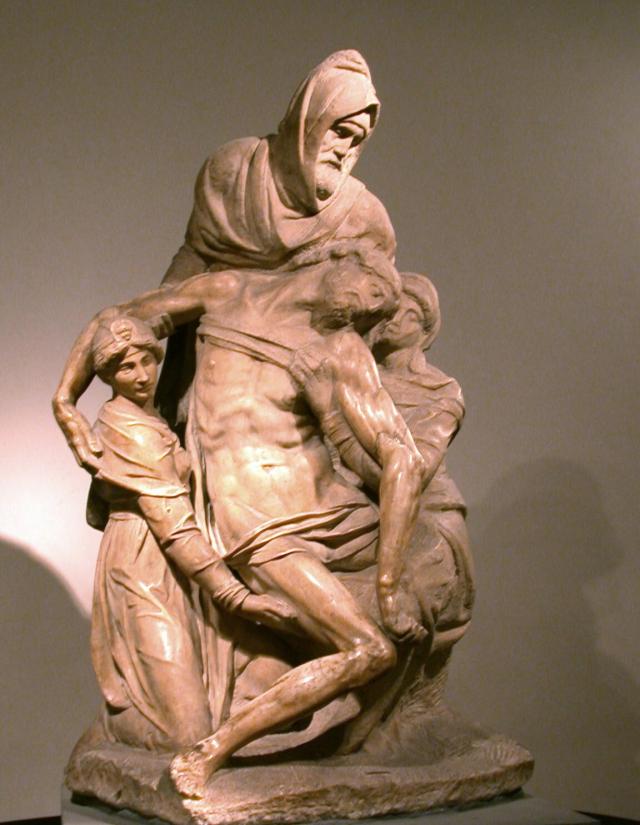 While in Italy a few months ago surrounded by the glorious art of the Renaissance — a period of cultural rebirth after the darkness of the Middle Ages — I had an epiphany.

This happened while listening to David Archuleta’s Ave Maria as I was viewing Michelangelo’s Pietá in the Florence Duomo museum. Michelangelo was a devout Roman Catholic. His art was commissioned by several Popes.

Michelangelo was a man of great faith, and he was an artist inspired. His art cuts across centuries, religions — across humanity.

Not a Catholic? An agnostic? Atheist? ….No matter…. Because this Pietá, this most achingly beautiful, profound and dramatic work of art, carved when Michelangelo was nearing his 80s speaks volumes about the human condition.

Its message brings to life Michelangelo’s great longing to merge his soul with God and that pathos is unmistakably reflected in the artist’s representation of himself as the bearded man supporting Christ.

And, Michelangelo’s tender yearning is there in spades. It speaks to the viewer no matter their faith, their religion.

The day I stood before this masterpiece in Florence, people of all cultures, all walks of life, were gathered round it with me. We had made a pilgrimage of sorts, whether it was an educational trip, a holiday or a faith-based adventure, to see Michelangelo’s Pietá. And there was a sacred sense of awe, hushed whisperings; we were in the presence of something most rare and wondrous. Yes, all that, and more because true art transcends religion — it is an expression of the innermost soul; an expression of yearnings and ideals, of deepest hopes and joys, of meanings and purpose.

My epiphany: I just gotta hand it to David Archuleta. He walks a very fine line.

He obviously is devout in his religion. He doesn’t hide that. He doesn’t emphasize it either. It is who he is.

He handles with the aplomb of a veteran ambassador, seasoned in the diplomatic handling of the Arab -Israeli conflict, that delicate and fragile balance of communicating faith and religion.  Or maybe, it is just pure dumb luck. Either way, it works. 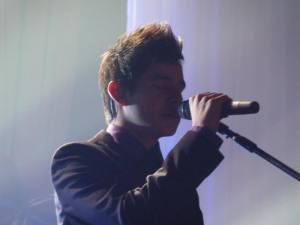 David puts in print his thoughts about his faith and religion in his liner notes on his Christmas From The Heart album. He gives thanks to “…God who comes first in all this.  It is because of Him that I’ve gotten the chance to do something I love so much.”

He then describes his intentions and purpose of the album:

“I dedicate this album especially to Him, and our Savior Jesus Christ.  Maybe it can be another way I can give back to them and to all those who listen to the songs as well so that they can feel the spirit and message within them…

“Through this album…I hope you understand where I come from with my music and as a person.”

He then continues with:

“…I also hope the music on this album will go beyond anyone’s personal religious beliefs so I don’t want anyone to feel I am only addressing this to people who believe in a certain way.

“I want the experiences that you may feel through the music to communicate to you in your own personal language and in light of your spiritual or religious beliefs.

“Music has a universal message that can speak to people of different ages, beliefs and languages…”

The Product Description on Amazon on David’s autobiography, Chords of Strength, to be released on May 4, 2010 states, “… David opens up about the strength he draws from his unshakable faith.”

And, so, we will soon have David, himself, revealing to us additional insights about his faith, his religious beliefs and how that has made him who he is.  And, what an appropriate vehicle to communicate his fundamental truths — an autobiography, where he can be sure the public hears his words and understands his meanings just as we did in the CFTH liner notes.

Michelangelo didn’t have liner notes to deal with, of course, he expressed himself through his work — an approach David has largely followed, as well.

For Michelangelo, these works were depictions of his relationship and/or thoughts on God and his religion as he experienced his 16th century world around him. His art has stood the test of time and invites all to share his deepest yearnings, hopes and joy. No matter our religious beliefs, we see the beauty and we feel the pathos in his art. 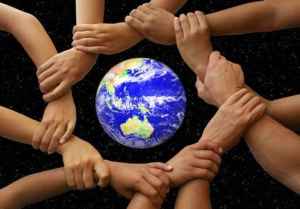 So, too, I think much the same can be said for David’s recordings and performances. Like Michelangelo, David’s art is for all humanity; it is an expression of his innermost soul.

It encompasses and embraces all of us, from Atheist to Zen Buddhist. We simply open our mind to the message and listen with our heart.

And what is David’s heartfelt message?

Who better embodies in art, word and deed, the essence of this song:

We Are the World

We can’t go on
Pretending day by day
That someone, somewhere will soon make a change
We are all a part of
God’s great big family
And the truth, you know love is all we need

This entry was posted in Fan experience and tagged art, christmas from the heart album, David Archuleta, faith, liner notes, michelangelo's pieta, religion, Renaissance rocks, we are the world. Bookmark the permalink.