Flagstaff @DavidArchie recap from the lovely and amazing Awestruck

David Archuleta road trips are always worth it. Even when you’re feeling travel weary and your hair is a mess!

The reason for this was that Mr. Awestruck and I drove to Flagstaff from Las Vegas on the day of the concert.

Our hotel room wasn’t ready when we arrived and we needed to be at the theatre for 4:45 for VIP. Thank goodness the theatre was just down the street.

Fortunately, hubby persuaded the hotel to hurry up with our room, but by then it was 4:15.  You may say, “hey, that’s loads of time” BUT I have an air cast on my foot and I’m not moving that quickly these days.

So instead, I did a few exercises on my yoga mat, which was too funny as David posted his pre show workout on Instagram lol.

I wheeled myself down to the theatre on my knee scooter and we got there at 4:50…  turned out we didn’t have to be there till 5:15 (as my email had said) but I trusted hubby and “didn’t want to miss a thing”… isn’t there a song with those lyrics? 🙂

They let us in so we could wait inside and I’m sitting on my scooter thinking about my hair… I’m just going to meet David what’s the big deal? 🙂

Along came the third person who was coming to the VIP. A young Japanese girl who came from Japan all by herself to see David!  Her first VIP! Minori was so excited and nervous that it actually made me calm!

Kari brought us in for the VIP. David warmed up and then sang a Christmas song not on the set list, don’t ask me which one.

Then we had Q and A.  We offered that Minori should go first, but she was tongue-tied, so I asked him a technical question.

Minori is still too shy to ask a question, so hubby tells David we went to see Paula Abdul in concert the previous night.  David asked where she was playing and they had a bit of a conversation.

Hubby showed David the 2009 Christmas tour T-shirt he was wearing and David said he hadn’t seen that shirt for a while and that it made him feel old!

We turned to Minori but she was still unable to speak. David saved the day and asked her where she was from and asked a few more questions. That helped Minori feel brave enough to ask David what his favourite Christmas song was.  No surprise, he said O Holy Night.  Hubby commented on how his voice had matured and David said he shouldn’t try hitting the high notes when he feels tired and cold.

Then it was picture time and, at Kari’s insistence, I succumbed to getting my picture taken with David. Minori gave David a Christmas present (see below).

I could not tell you the names of all of the songs he sang.  I was so in the moment.

I was bopping to the music at first, then transitioned to being transfixed as he mesmerized me with his emotional, happy, reverent, fierce singing from the heart.

This guy connects deeply with lyrics to the song that he is singing and FEELS the music.  It pours out of him and moves my heart and soul whenever I get the opportunity to see him live. 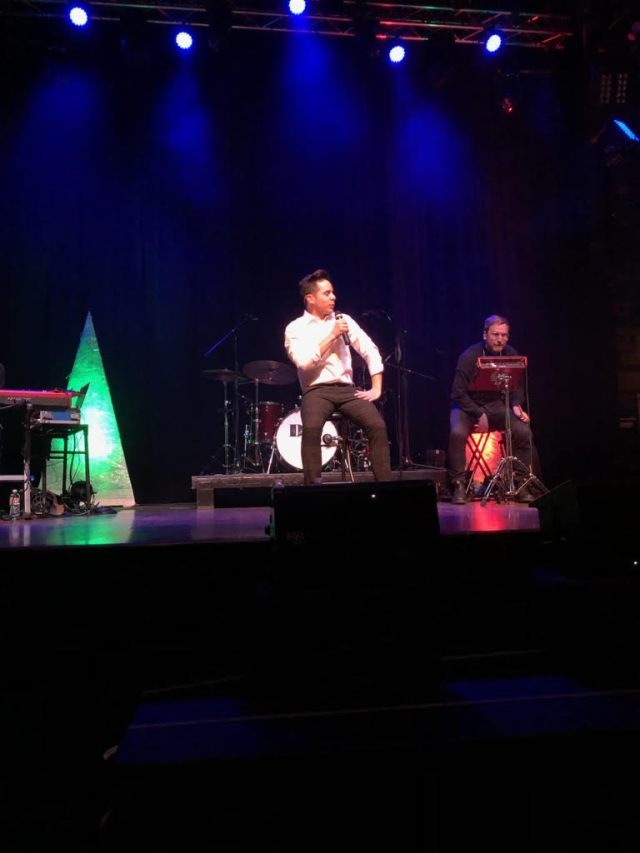 At the end of the show, when he was done, I went up to the stage with tears in my eyes and an emotion-filled voice, and told him: “always believe in yourself, you were meant to do this.”

p.s.
Can we all just say a collective Christmas Hallelujah for the costume change into those festive green tartan slacks?!? Merry Christmas, Happy #plaidchuleta Days!!!

A few of the amazing interviews etc. we’ve been getting lately!!!