Okay, my quick recap of Tuacahn Night 1 talked about the magic of this place. Little did I know that David would take that Friday night magic and abracadabra it up into a show of spellbinding skyrockets.

I don’t know if it was the wild Saturday night crowd or the fact that it was his last show until his next run, but he and the band were in sync and on fiyah! 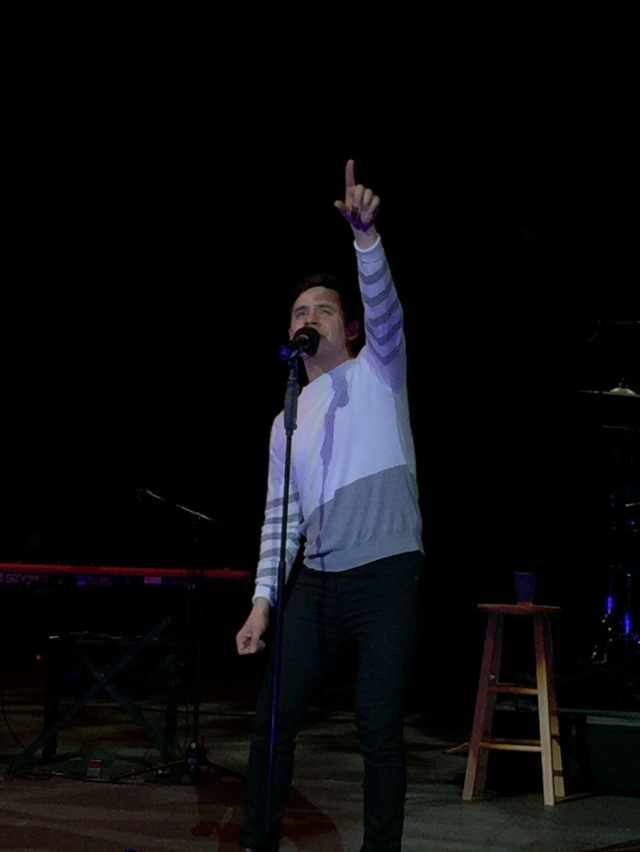 Maybe they’ve been doing this the whole time, but I loved how Desmond and David connect and interact during Someone to Love… like they’re having a convo or something, so cool.

Thunder was Thunderous and I totally could not contain myself during Scars to Your Beautiful… love Alessia Cara but David just ROCKS this song. I think he may have pointed at me at “no scars to your beautiful” but I was rocking out myself to it so much that my eyes weren’t quite focused, lolol. [Sorry, I can’t find a vid or Peri of the Sat. night Scars, so if you do PLEASE share in the comments… SOOOO good!]

You could hear a pin drop during his intro to Postcards in the Sky … he was so passionate and personal and heartfelt and I’m pretty sure it touched every person there. Sometimes when he is so emphatic with these messages, I can’t help but think that he’s talking to his younger self, in a way… not sure if that makes sense.

The lovely and amazing Tina, transcribed some of it on her Tumblr:

See the rest here. And Shirley’s Peri of the whole thing.

It was really cool to see all the people that had the postcards that Shirley & Gwen handed out before the show waving them in the air during the chorus of Postcards… I did actually think I was taking a video of that and showing the crowd but I guess I didn’t quite fully hit the “record” button. #fanfail

I’m Ready was incredible… every song was, of course, but I just felt so much emotion from the songs on the Saturday night show. The crowd was electric and at one point a row of girls right behind me all yelled out, “WE LOVE YOU, DAVID!” … truer words were never spoke…  🙂 🙂 🙂

When the lovely and amazing Cheryl & Shirley & Shelley & Gwen & Linda (hope I’m not missing anyone) held up the David-face fans that Cheryl & Shirley had had made, David’s reaction was priceless. He asked them to turn them around so the rest of the crowd could see them. So cute! And he went on to say something like, “Well, they say if you can befriend yourself you’ll never feel alone.” *DEAD* And then, “That kind of threw me off a little.”

Aiming for Hope about KILLED me. It wasn’t on the set list (Say Me was)… and as much as I love Say Me, I really needed to hear Aiming for Hope this weekend … it just struck me so personally this time and I 100% bawled through the whole thing… not one of those slow builds to getting choked up but tears immediately springing forth and rolling down my cheeks. I could hardly see him through all the salty water. I was about to stand at the end but he missed the final piano chord and, after weeping, everyone chuckled when he took like 4 stabs at it.

As it turned out, the next song killed me (and everyone else) even more.

David started getting choked up even during the intro… it was so moving… and people chuckled when he swatted away a moth that was flying around him before starting the song but someone (Kalei?) accurately pointed out that moths are attracted by light 🙂 🙂 🙂 … anyways, see for yourself:

What you can’t see in the video is just how overcome with emotion David was at the end… and how everyone spontaneously rose to their feet and applauded him for a really long time … and he stood and nodded and soaked it all in while he collected himself… he was visibly moved by the reaction and the support… it made me cry even more, dang it.

A friend who was sitting a few rows back from Refnaf, Awestruck, Mr. Awestruck and I told us that, near the beginning of the song, an elderly man near them got up and started walking slowly down the stairs toward the stage, then stopped and put his hand on his heart as he stood there for the rest of the song. I totally get that. Such a powerful performance… I’ll never forget it.

And this, from Brenda: #word

You might have seen in the vids and Peris how windy it was Sat. night… and that added to the magic of it all…

… sitting under a full moon on a starlit night surrounded by otherworldly red rocks while a warm breeze blows through your hair and David Archuleta sings his heart out.

Doesn’t get much better than that, my friends.

How about you guys?? From what you caught of the show, what did you think??

29 Responses to Tuacahn is magic Part 2