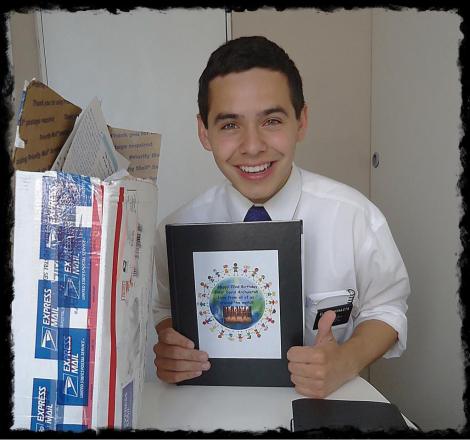 This is David with last year’s book. This year’s picture was taken with an old camera that lacked the technology designed to withstand the brilliant glow of The Archuleta.

Inquiring minds throughout the fandom have been wondering whether or not David got his birthday book in December … well, the crack investigative team at SAz* is pursuing several strong leads**:

Lead #1: The Chilean post office has gone on strike before and the overwhelming volume of postcards, letters and packages going to Rancagua may have pushed them into work-to-rule so that David gets his birthday stuffs in time for his 24th.

Lead #2: Rumour has it that David  is using the book to teach introductory English to needy orphans in the remote countryside. This selfless work has resulted in improved school testing scores for words like “angel,” “inspiration,” and “thud” and for useful phrases like “get back here, pronto,” #DA2014″ and “To my future husband.”

Lead #2: Pablo, a kind but lonely postal worker in the central Florida depot has become a huge David Archuleta fan in recent years. He stumbled on the Somos El Mundo video and was prompted to make his first ever youTube comment… an eloquent “ASLKDFFALDFKAJFKAJ.” So when he saw the big box addressed to David come through, he couldn’t help himself… he decided to “borrow” the birthday book for a while, so he could add his own personal b-day wishes… six weeks and 18 pages later, he is finally ready to send  it on its way. But first he plans to photocopy it, replace “David” with “Pablo,” and mail it to himself in time for his own birthday.

Lead #3: Knowing how embarrassed David gets when mail arrives for everyone else in his household… a single envelope for one, maybe some “To The Occupant” flyers for another, while he receives big Fed Ex boxes and Amazon trucks of snacks… his compadres decide to stagger his deliveries so he can feel more a part of the gang. Although when the Amazon truck fails to deliver his bi-monthly supply of Honey Bunches of Oats, he starts to suspect something is up. He flings open the door on the closet with the big sign that reads “INAPPROPRIATE DISNEY VIDEOS” and VOILÀ! His birthday book and six months of mail tumble out. Score.

Lead #4: After mini-bowing to sold-out crowds and rousing cheers at his Christmas concert performances, David was determined to stay as humble as ever. Receiving the birthday book was more praise than he could handle so he quickly found a good-hearted yet incarcerated fellow, also named David Archuleta, and presented him with an unexpected birthday gift. The man was so touched, he got a special tattoo added to his arm of David’s two sisters.

Lead #5: David was utterly thrilled to receive his latest birthday book and sat down to write a long, gushing thank you email for Kari to pass on to us. Unfortunately, he was also wolfing down his third helping of Porotos con Riendas and Chacarero Chileno and ay, carumba, his thank you note dissolved in the thick fragrant sauce that splashed around in his enthusiasm. He is still scrubbing his white shirt.

Lead #6: In the foothills of Santiago, an old crone who has devoted her life to rescuing orphaned hedgehogs has struggled to prepare her meagre daily meal of gruel on a table with a single wobbly leg. Enter Elder Archuleta… who wedges the tome beneath the stubby table leg while singing O Ven O Ven Emmanuel softly under his breath…. “Struggle no more, Señora Santa Maria,” he says, wiping the dust off his fluorescent orange tie. “I’m happy to part with my beloved 2013 birthday book to bring your life peace and stability… it’s what I do. My cherished fans will understand.”

Lead #7: Last year, when David sent the picture of himself with the birthday book, he included a footnote that got lost in the transmission. It read “Dear fans, this picture is for this year and next year. Hey, I’m a busy guy. Ciao.”

If you guys have any leads that could help in this very serious investigation, your identity will be protected… if not your pride. Thank you and good night.

*There is no such team.

**By strong we mean fictional.

This entry was posted in Utter nonsense and tagged Happy Birthday David Archuleta!!!!!!!!!!. Bookmark the permalink.