A David Archuleta fan to the Finnish revisited

Remember our lovely Embe from Finland who wrote the post below???

Will keep you posted on how to vote, in the meantime, please enjoy Embe’s original post below!

Snow for SnowAngelz! This is Lapland, in northern Finland.

Here I sit. Waiting. Waiting for my very own, signed copy of Chords of Strength. Lately I’ve been waiting a lot. Waiting for new David interviews and performances, waiting for David’s book, waiting for his new music…. waiting. And when the wait is FINALLY over for many others, I have to wait some more. I wait for some lovely fan to upload the interviews, the performances and the new songs to Youtube. I crrrave, not orange juice, but MY BOOK. It’s tiring to tip-toe around David fansites, careful not to accidentally read spoilers about COS. Because now it’s out in the open. People are quoting it, listing their favourite chapters and scanning the photos online for all to see. I feel left out. I don’t know how much longer it will take for my copy of COS to arrive, but waiting for it does certainly take all the perseverance I have in me. Lesson learned, David.

I’m from Finland, see. A Finnish Archie. I’m very proud of that title — makes me feel special, since there are not many of us. Actually I don’t know any other Finnish Archies. And because I’m selfish, I’m okay with being the only one for now. How cool would it be to grab David’s attention by saying, “Oh, by the way, I came to see you all the way from Finland!” And David would be all, “GOSH where did you park,” etc. And I’d get to tell him I’d walk a thousand miles (or in this case 4,751) if I could just see you.

Anyway. Being a Finnish fan of David is no picnic. I don’t see any TV shows that David’s on, I have to wait for months to get my book, I rarely read about David in the magazines they sell here and of course, the chances of ever meeting David are quite slim. (By the way, why do “slim chance” and “fat chance” mean the same thing?) But I am really grateful that they aired Season 7 of American Idol over here. Because that’s when I laid my eyes on the most amazing creature on the face of the Earth. Mr. “I’m David. I like music.”

Me with my dogs and a “vihta” — a traditional “bouquet” of birch branches Finns use in the sauna. Basically we soak the vihta in hot water and then hit ourselves and others with it. It’s great for blood circulation. Or I might just be brainwashed into believing that.

I had watched AI from Season 5, but none of the contestants blew me away like David did. One of the reasons that he had such a strong impact on me was probably the fact that I lost my mom at the end of March, 2008. She battled colon-cancer for three years and all I could do was watch her slowly fade away in front of my eyes. I tried to be strong in her presence, because I didn’t want my last moments with her to be wasted on me crying. But something broke inside me. I’m traumatized for life by what I witnessed my strong, brave mom go through during those three years. I will never say she “lost” the battle against cancer — if anything, SHE WON. The illness didn’t break her spirit, it didn’t affect her mind. And the way she handled the limitations the illness brought on her path was truly incredible. I still cannot believe her courage and I will always continue to tell people what an amazing woman my mom was. She died at the age of 49, just 10 days after her birthday.

As the cancer started taking its toll on all of us — mom, me, my big-brother, my dad, my mom’s mom, all of our relatives and friends — I had to find a place in my mind where I could hide. A place where I didn´t have to remember my mom being sick, a place to pretend. I couldn’t hide my feelings in our family; we´re such a close bunch. It´s impossible to pretend without someone noticing it (and sometimes it’s a real pain in the butt). So I wanted to find a way to escape the cruel reality. Often times it would be the gym, where I would train so hard my muscles we´re crying for help. I channelled the pain in my heart towards my body. But then I started watching Season 7 of American Idol. At first there was nothing special about it. But then I saw this young man with black hair and a nice tan explaining something about paralyzed vocal chords. And he paralyzed me with amazement. Each week I looked forward to seeing him and each week he helped me escape the pain that was haunting me whereever I went. 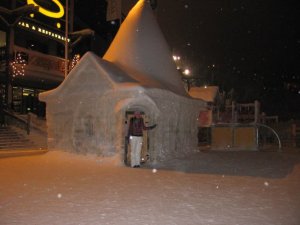 Here I am at home … Kidding! This is an ice chapel in the north. I live in central Finland, in a town called Jämsä. In the summer it’s really warm here, hot even (just to make that clear lol).

When David sang “Heaven”….. wow. I couldn’t believe how effortlessly he did all those runs, which I take pride in in my own singing. Finnish singers don’t do those. And I had always disliked Finnish music. I listened to groups like Sugababes, Backstreet Boys, Evanescence, Maroon 5 — each very different from eachother, but all had one thing in common: unique voices. Voices that you recognize. Voices that are bendy; that can do runs. Finnish singers don´t take risks like that. And when they do, it sounds very stiff and rehearsed. So I loved singers who added a little somethin’ somethin’ to their vocals. But none of my former favourite stars were like David. He was 16 and his voice was like water; it swirled around obstacles, flowing with ease and every sudden movement just melted together, the continuous flow never breaking. I will never forget it, and since then I have found comfort whenever I hear David’s voice, whether he’s singing or speaking, even. He glows purity.

So. David’s artistry, his soul, his warmth, his unique aura reached all the way to Finland, all the way to my breaking heart. David was the needed super-glue. I thank the Lord for David and his healing power and for the internet (though I’m not sure if the Lord had anything to do with that), because it gives me access to David. It’s like the key to the medicine cabinet. Not to mention all the special bonds I have formed with other Archies. IDF, Snarkies, TDC, The Voice, Soul David and of course, SnowAngelz. Finally I have someone who understands. I don’t have to explain why a guy licking his lips, laughing awkwardly, singing five seconds of Maybe I’m Amazed or tweeting about Thai food has me juddering in a fetal position in the corner of my couch. You all truly are (arch) angels, and we all have been infected by the same disease; ODD. ODD knows no cultural borders — it often catches you whether you like it or not and there is, fortunately, no cure.

Now, I must end this rambling nonsense to go check my mailbox for COS for the fourteenth time today. Perhaps David heard my frustrated call and hand-delivered the book himself 😉

P.S. “Be Still My Soul” (originally named “Finlandia Hymni”) was composed by Jean Sibelius, a world-famous Finnish artist. A few years ago Finland was actually considering changing the Finnish National Anthem, called Maamme, to the Finlandia Hymni, because Estonia has the same anthem as Finland does. One of the reasons was also that Finlandia Hymni represents Finland’s survival through the continuation of the war that was part of World War II. Here is the original, Finnish version of the hymn, and here is David’s:

P.S. Here is Embe’s beautiful cover of “My Kind of Perfect” … enjoy!

This entry was posted in Fan experience and tagged David Archuleta, The Voice Finland. Bookmark the permalink.

32 Responses to A David Archuleta fan to the Finnish revisited