In honour of abanana77’s birthday, I was planning to repost her amazing David vlog tags blog (especially since those beloved tags have mysteriously disappeared from his vlogs 😦 ), but major fail, I missed her actual b-day (which is the same as Google’s, so I have no excuse). So please join me in wishing Agent Banana a belated happy birthday, and enjoy rereading her tag blog below. —TOfan
***************** 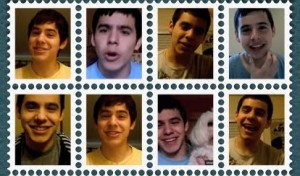 In this Archu-drought, I know a lot of people have been rewatching David’s old vlogs (I know I have). It’s great because you can watch his smiley face talk about how excited he is for stuff that is “coming up,” and we know how it all ultimately turns out. It helps remind me of all the amazingness that David and the fans have been through in the last couple of years.

I love every part of the vlogs: The “Hey guys, it’s David here,” his giggles and random smiles, his “more info” section and his “I’ll talk to you guys later!” But one of my favourite parts of the vlog (which, in my opinion, is super-underrated) is the tags. I find they give a teeny tiny bit of insight into David’s quirky self. So let’s take a quick look at some of my favourite YouTube tags:

More info: So I’m not sure why these take so long to get up and going after uploading them. If you have suggestions on what I should do so they are uploaded sooner I’d love to know haha – I did this early in the morning haha, so I’m a little tired but I guess I wouldn’t make too much more sense if I was awake either. I’ll try to make another one as soon as possible!

I love this vlog, and I’m sure it’s also very close to a lot of your hearts. But I got a little bit more excited about it when I discovered that the first tag David ever typed that wasn’t his name was “Canada”! How awesome is that? I know technically this isn’t his first vlog (he had those Q&A ones before), but the tags on that one are: david archuleta american idol season archie archuletta james simon cowell radny jackson paula abdul id, which I think we can safely say is not David himself just purely based on the lack of capital letters and the misspelling of “randy”. The Toronto vlog tags are his first tags, and they are quite short and to the point. We’ll see him get further away from that in later vlogs.

More info: FINALLY got another blog up giving an update on what went on this weekend. Sorry it took so long, I just avoid making them since I have such major issues making anything that involved me talking. I should probably find a way to take blog-making classes or something.

At first when I saw this, I was really confused about the lack of order of his tags. Then I realized (I am a little slow sometimes) that youtube, for some reason, put his tags in alphabetical order. So I took it upon myself to solve the puzzle and figure out what he was saying: Obviously “David Archuleta” goes together, “The Break and Repair Method” was a band he was talking about at the “Matt Nathanson conert”, and “New” obviously goes with “York”. This leaves us with “Suck at blogging”. Haha, oh David.

More info: At the airport wandering around with Kendra, the keyboardist on tour, during a layover. Sorry, I know my voice is excruciatingly gaspy and more hoarse-sounding than it already usually sounds. But it’s because my voice really dries out on airplane rides haha. Just thought I’d share our interesting finds in one of the stores there. I was late uploading it because it took me forever to find a cable to hook up the camera to my computer.

The “doo” speaks for itself.

More info: Just talking about what has gone on this week. I know it’s not that exciting haha. But just thought I’d share what’s been going on. Also if you want to learn more about Rising Star Outreach go to Risingstaroutreach.org. Thanks!

I think this is the first vlog where I really noticed his hilarious tags. I guess I’d never really looked at them before that, but when I read “orange pen”, it really struck me as funny. And ever since then I became an avid tag reader.

More info: I apologize for the lighting. Had a good week of writing! I have the weekend off in LA so I’ll be spending time with some friends. Back to work on Monday. Took a cab drive which was pretty expensive, left my suitcase in the trunk, and took the Metro for my first time to go back. Fun week 🙂

I find this one amusing because he went a little bit Capital Letter Crazy. Haha 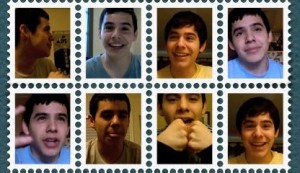 Here are a couple more that I find hilarious:

More info: I made a video quick backstage at the Crocodile Rock venue in Allentown, Pennsylvania. You can hear Lesley performing a little in the background haha. But I just talk a little about what’s been going on, and how I’ve been trying to stay healthy haha. I’ve been eating a lot more vegetables and fruits lately, thanks to Kendra haha. She’s keeping me in line. I’m trying to stay away from a lot of chocolate and unhealthy stuff to keep my health up, which kills me sometimes because I love that stuff so much! 😦 . But it’ll be worth it if I can keep it up! Thanks for coming to the show you guys! Can’t wait for the rest of the tour!

More info: Back in the states for a bit. Notice how the hall I’m in never ends!! I was wondering if I was going the right way or not. I apologize again for how scary-looking I am. I had been traveling for like 20 hours, with the last flight being for a straight 16 hours. It was a fun flight though. Singapore Airline flight attendants are really nice. haha.

More info: I’ve been on voice rest for the last little while since I lost my voice, and it’s been pretty rough. But it’s back! I’m glad for that. My buddy Ashlee has been on tour so I have a friend, and so everyone else does too because everyone gets along with her pretty well haha. I’m sorry that this is so long without much meaning to it. I’ve been kind of out of it for the last few days. Maybe it’s because of my allergy medicine I was taking lol. Anyway if you end up watching it all I hope you were at least somewhat entertained.

More info: So today is the day that my wisdom teeth will be getting pulled out. Oh joy. It’s an exciting time guys lol. But I’ve been enjoying running this week and getting some exercise in! Today might be my last day of running for a while though since Idk how long I’ll need to recover… But I’m just anxious to get this all over with!

More info:Should I listen to my mom and wait for a haircut? Or no? ha..

More info: I gave up on the last blog, so I just made a new one. My cheeks are finally back to normal! I’ve had a nice time recovering though and relaxing. Went to the Colbie Caillat concert! Was awesome getting to see her again. She’s one of the nicest, casually cool people you could meet. Been exercising and getting back in shape! Going to Nashville for the week to start working on some writing and new projects. Christmas album comes out October 13th! Next week! woot woot

More info: Sorry this is so late! I really did try hard to get a video blog up on Saturday but it just wouldn’t work. Hope everyone had a great Mother’s Day though! What did you guys do for the weekend?? “Chords of Strength” comes out in a few weeks! Going on the book tour soon too.

Random facts you probably did not know about David’s tags:

1. The fewest number of tags used in one vlog: 5 (in the Haircut vlog and the Claudia’s birthday vlog).

2. The greatest number of tags used in one vlog: 18 (in the vlog about his sister’s new cats).

4. 70% of the tags are capitalized (either because they are names of people or places or he just felt like putting in capital letters).

5. David made no spelling mistakes in his tags.

8. Only in two of the vlogs does his name not appear in the tags (the Invisible Children and the Christmas tour vlog).

Well, there you have it! A teeny tiny peek into the weird and wonderful brain of David Archuleta through his choice of vlog tags 😀

P.P.S. If you’d like to download any of David’s vlogs, the lovely Sarah at Absolute Archies has all the links HERE.