Four-show @DavidArchie recap: THIS is Christmas!

I’m sorry it’s taken me so long to do this recap, but every time I pick up my pencil (yes, I still use a pencil), my eyes well up and I can’t see the paper. Archuleta, you are causing serious dehydration here.

I’m also still pinching myself that I got to attend the first four shows on this tour. Man, I must’ve done something pretty nice for someone special in a previous life.

I’ve never been to the first show of a David Archuleta tour and I can’t describe how edge-of-your-seat exciting Westbury was. Not knowing the set list or what’s coming next was thrilling beyond words. It was like the whole Westbury venue still held the magic from that last CFTH show – the air was electric.

The wild cheering started before David even came out. David’s often said he wonders if anyone’s even going to turn out to see him, but that screaming, roaring crowd left no doubt about how excited everyone was to see him. When the band started to play and David jauntily stroll-swaggered out for Sleigh Ride, a tidal wave of love poured onto that stage and over those BOOTS!

I don’t know if it was pre-tour anticipation or feeding off our excitement, but David exploded onto that stage like I’d never seen him. Ever. As Kizzi later overheard in the ladies room, he was “a beast!”

Commanding – even cocky at times – more than just the exquisite vocalist we know – he was a true showman.

I’m a huge jazz fan and when David grooved into the slowed down, sultry rhythm of “This Christmas,” I took up permanent residence in that song and need to send out change of address cards.

And the deafening ROAR when David said he was going to do some pop songs and everyone leaped to their feet to chant “Down, Down, Down, Down” made my heart swell.

You’ve now seen the videos for Fa La La and CEM and Little Drummer boy, but the shock and awe of so much amazingness was almost too much too handle. In the break and at the end, fans were literally walking around the lobby with glazed eyes and jaws hanging open, speechless. And the crowd was all ages, all genders – there was even a lineup for the men’s room… at a David Archuleta concert!!!!

Over all, I felt David was making a statement with this show. The same one he’s made in interviews. “You know what, no one can tell me who I am. THIS is who I am.”

Even introducing “and here is Mr. Jeff Archuleta” as the conductor of the youth orchestra seemed to be declaring, “This is my dad – he’s in my life and career as long as I want him to be so suck it up, people.” (He didn’t actually introduce him like that, btw. 🙂 )

One common denominator for all four shows for me was the outpouring of love for David – standing O’s (well-deserved) after almost every song. Spontaneous whoops and cheers after runs and glory notes. And David BEAMED! He lapped it up, flirted, cavorted, salsa’d, mistletoed and parumpapumpummed his way into every heart there. Joy, pure joy.

After the show, a bunch of us sat around stupified, trying to name even one other performer who could excel at so many different genres in one live show … jazz, pop, classical, country (Amy Grant), Broadway (CEM) and rock (LDB)? We couldn’t come up with a single name. I know some fans would like him to pick one genre and run with it but I like Renaissance Man David.

My biggest impression of this show was that everyone there “got” David and he knows and appreciates that. At one point in HYAMLC when he sang the line, “Through the years we all will be together, if the fates allow” he gazed slowly, from left to right, across the crowd, as if to say “we’re in this together, folks.” Chills rippled up my arms.

If I had to explain the difference between this show and the next three, I’d say Westbury was spectacular in its “Welcome back, David, we have MISSED you!” outpouring of love and David was explosive in his no-holds-barred fierce attack of each song. All that love and acceptance seemed to lift him onto our collective shoulders and give him the freedom to spread his wings and fly, baby, flyyyyyyy. 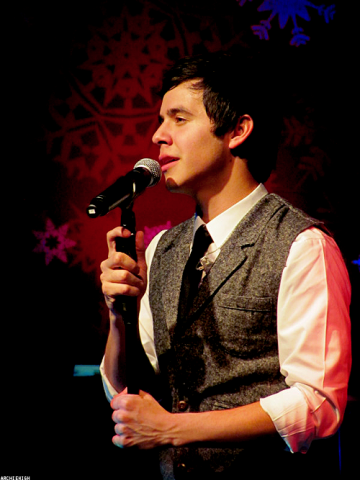 Irving Plaza had a younger, hipper vibe overall – lots of 20something guys and girls in the mosh – all hanging on his every word, roaring with laughter at every Davidism and he was totally loving every minute of it. He was the most flirty, playful for this show, I’d say … and his twinkly grin told me he knew that the crowd loved every “hint” of dancing he did and he worked those modest/hottest mooooves despite himself!

I loved the energy of the mosh. And “This Christmas” … I can’t even. This is my lame iPod video of that song… I took it because I knew I could. not. wait. to hear it again…and again…and again. It does give you a mosh-eye-view of how amazing that crowd was.

When he opened the gift boxes on stage with a sly “What have we here?” then tossed tour T-shirts into the mosh, saying “Ya, I’m cheesy,” again the crowd roared.

For Fa La La, I hope someone caught on video the girl who glomped David at the very end. HiLARious. He was barely off-stage when the DA-VID! DA-VID! DA-VID! chanting began to bring him back. And the wild man unleashed at the drums was the best. encore. ever. To be honest, I still can’t believe what I witnessed there. Epiphany? Primal warrior? Beating back the shackles people try to place on him? Or just plain old wild, crazy fun? Whatever it was, the crowd went absolutely WILD. 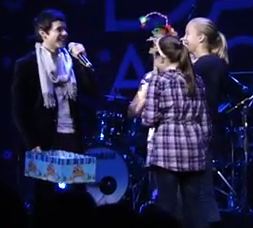 “That’s mistletoe! … I don’t know if it’s active while we’re on stage here though.” (Screencap from @Suttygal vid, click 2 watch)

For me, this show had the best acoustics, audio, lighting – and with so many Canadians there, the best crowd, obviously. 🙂

There was something else too. Call it “spirit” … but of all the four shows, this one gave me the most “MoTab” moments of feeling during FN, SN, OHN and of course Ave Maria.

Again, with the standing Os and spontaneous mid-song hoots and cheers for change-ups and big notes. Playful crowd too. One deep voiced fan screamed out, “I love you, David!” and another from the opposite side yelled, “I love him more!” and everybody laughed, including David.

And when “snow” fell from the ceiling, the winter wonderland ambience was complete. (Random memorable moment: When the chant for an encore started, KT told me she saw guys pounding their beer bottles on the table chanting for David to come back out.  🙂 ) And seeing so many wonderful fan-friends was the icing on an incredible cake. 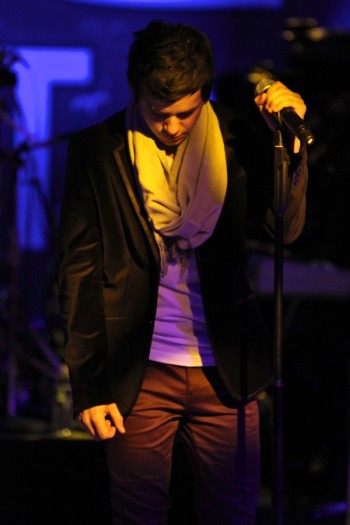 Chatty David FTW! I don’t know if he was on a high from the three spectacular nights before, or if someone put extra sugar in his Cascadian Farms cereal that morning, but you could not shut him up. (Thank goodness, lol.)

“How many people here speak Latin? … That many?? That’s more than I thought! Wait, that’s Latin, not Spanish, right?)

Before the show I recognized an usher who’d “discovered” David at the CFTH show (and Miss Trish kindly gave her a CD!) and she said when she heard he was coming back to the Sherman Theater, she made sure she was working that night so she could see him perform again.

Oh, and the GP/LIB mashup in VIP…  he dedicated it to the fans and said that’s why he wrote it… so powerful, piano glitches and all, I almost keeled over from the beauty of it. I had a vision of David performing that on a stark awards-show stage someday, televised around the globe.

Overall, what these four shows left me with was the confidence that David now knows without a doubt that we get him and are behind him every step of the way.

Idol’s long over, Jive’s gone, but he’s still here making music … on his own terms … and we’re still here cheering him on … and we’re not going anywhere. I think this tour is his way of acknowledging and thanking us for that. But also to declare to the world (as Refnaf so beautifully put it in the last thread:

“When David took the drum sticks, held them high above his head and belted out the ‘Me and my drummmmm’ It was like he had a message for the world: This is me and this is what I do and I do it for Him, my WAY!!!”

You find it
You hold it
You feel its grace

p.s. And I got to tell David in person how much I love Elevator. Life complete. 🙂 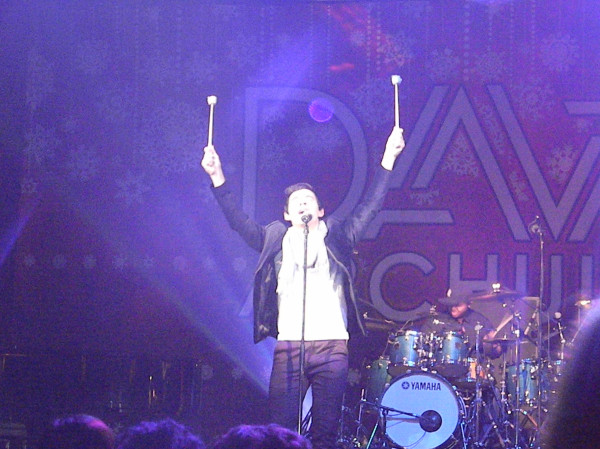 This entry was posted in Concert recap and tagged David Archuleta made it snow!!!!. Bookmark the permalink.

53 Responses to Four-show @DavidArchie recap: THIS is Christmas!