Confession time, except in rare circumstances *cough*fellowCanucks*cough* I don’t pay a lot of attention to the changing roster of musicians who back up David Archuleta. So long as he’s happy with them, and they make David and his songs sound as great as they deserve, I’m good.

That said, I’ve definitely been curious about the reported jazz “prodigies” who’ve been hand-picked by David to rehearse/jam with him weekly and accompany him on the road.

Here’s what we know so far:

Here’s a cool news story about Mark from theSignal.com:

The director called “cut” for the day, and Mark Nilan Jr. headed back to his trailer.

A crowd of high school girls had gathered outside the auditorium where Nilan and the rest of the band members had just finished their film “take.”

“It’s the band!” Nilan heard the girls shout as he crossed the parking lot.

It was one of the first moments when Nilan, 26, realized what was happening to him. The second moment came after opening a flooded inbox of “saw you on TV!” e-mails from friends and family. 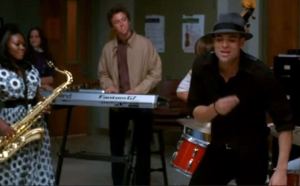 Mark Nilan Jr. on the set of Glee.

“I totally didn’t see it coming, but I’m loving every minute of it,” Nilan said while sitting at a keyboard station in his Saugus home.

While Nilan continues to adjust to his new television gig, a separate musical dream comes to fruition.

The California Institute of the Arts graduate has written and recorded his first jazz album “Hands On.”

This thing called jazz
From time to time, Nilan’s father still reminds his son of one particular car ride home. His parents had just picked up the 15-year-old from a summer course in jazz.

“My dad always tells me to this day that the ride home was the most quiet ride home ever,” Nilan said. “That’s because I was listening on my headphones to this new thing I found called jazz.”

Music in general was not new. His father, Mark Nilan Sr., was a television and radio music professional. Ray Charles’ voice was heard often around the dinner table while Nilan was growing up in Detroit.

For 10 years, Nilan had played classical music. But it became stale to him, and jazz offered a freshness that seemed incapable of spoiling.

“Jazz is all about improvisation and creating from yourself,” he said.

After the jazz summer course, Nilan immediately honed his focus and asked his father to show him anything he needed to know about the music genre.

“My life goal had fully hardened,” he said.

Playing with soul
Nilan went off to study jazz piano for his undergrad years at Wayne State University in Michigan. He studied under the same piano teacher, Matt Michaels, who tutored his father when his father was young.

It was Michaels who encouraged Nilan to play keyboard for a gospel church in Detroit. Michaels thought the experience would grow the college musician’s talent and confidence, Nilan said.

“You open the door and there is everybody praising it up,” he said. “Everyone is running around, fully Holy Spirit-ed up. It was very small, but it was a huge family.”

The gospel worship called for on-the-spot improvisation, learning by ear and following wherever the music leads you, he said.
Growth was instantaneous.

“It immediately makes you not shy,” he said.

Perhaps most importantly, it taught him how to play with soul, he said.

“If you study music too hard, like by the book, you don’t play with feeling,” he said.

Nilan later received a similar opportunity while attending graduate school at California Institute of the Arts in Valencia for jazz studies. Santa Clarita Christian Fellowship church needed a piano player. He moved into the role and immediately felt accepted.

Nilan also stepped in as the church’s music director for three years. Now he is directing music at St. Clare of Assisi Catholic Church in Canyon Country.

Getting hands on
Under the direction of David Roitstein, CalArts’ jazz program director, Nilan began writing his album during his senior year.

After making some phone calls and working connections through his father, Nilan formed a band he considered to be “a dream come true” including: bassist Abraham Laboriel; drummer Gregg Bissonette; guitarist Ricky ‘Z’ Zahariades; and percussionist Brad Dutz.

“These guys are the best,” Nilan said.

Nilan’s father owns a recording studio, so he always had the opportunity to record an album.

But he waited until he was ready, he said. When the time was right, Nilan gave his all in recording 10 contemporary jazz songs in “Hands On.”

“I’m very hands-on down to the smallest detail. I wanted it to be perfect,” he said. “I definitely took my time and made it right. I didn’t want my debut album to be cheesy.”

Nilan wants to break the stereotype that contemporary – or smooth jazz – is elevator music, he said.

“Being a young guy, I wanted to establish some youth into the jazz world and some freshness,” he said. “There’s no elevator music here.”**

Nilan said his music has edge, and it’s “enough to bring song back into smooth jazz, and bring some energy.”

The instrumental songs are an expression of diverse influences in Nilan’s life, from his hometown and discovery of his love for jazz to his transformation within the gospel church.

“I would create landscapes – pictures in my head and then score to the picture,” he said. “I would sit at the piano and visualize back (in Detroit) and write to that.”

‘Glee’ finds Nilan
Nilan had graduated and his album was coming together. Little did he know, more opportunities were in his immediate future.

What Nilan humbly anticipated as a one-time gig, turned out to be a serendipitous start to an unexpected realm of his career.

“Being a musician, you don’t think about being on a TV show,” he said.

Jazz is his forte, but Nilan is passionate about all music genres, he said. He recently wrote a single for rapper Obie Trice.

“I’ve always been raised on music as a whole,” he said. “It was Stevie Wonder and Earth, Wind & Fire for lunch, and then Ray Charles for dinner. Then I’d go see the Dave Matthews Band in concert. I’m just in love with music.”

All the training, schooling and dedication are paying off. But Nilan doesn’t doubt some amount of good fortune has been on his side.

“All these lucky events have brought me here,” he said. “I definitely worked hard to get where I’m at. But either some higher power, or however you want to look at it, is looking out for me.”

It’s good to be in the right place at the right time, but you have to be ready, he said.

“Have it together, and just be ready for when those calls come,” he said.

So what do you guys think of the band so far? Are you gleeful about the Glee connection? Jazzed about the jazziness? Or  mostly excited that Mr. Nilan tweeted about “tour dates”??? 🙂 (Personally, I was hoping for @katedangerous on drums, but that’s just me…)

EDIT update: And thanks to Ben (see comments), we know that Brian Green is on guitar! (Thanks, Ben!)