I was a free man in Paris: The City of Lights responds to a David Archuleta tour announcement.

Mon histoire
Hi, I’m Zami and I love music. All kind of music. R&B/Soul (my favorite), pop, pop/rock, classic, etc… I even like some rap songs (but only those with meaningful messages, not the bling-bling ones lol). I’m 31 or 32, I stopped counting when I was 25. I never thought I was old until I was categorized as an “older fan” of David Archuleta! I live in Paris, France, and I’m a former teacher. I’m now a social worker and I (still) teach French as a second language.

Au début
The first time I heard about David was in a French blog. The journalist wrote something like “watch this kid! He’s amazing! American Idol has already found its winner!” I clicked on the link and it was a video of David’s performance of “Imagine.” It was the first time (since a long time) that I had being touched by a song and a superb voice. And when you think that I was never a fan of “Imagine,” you can tell that I was shocked, lol. After listening to the video like 1 million times, I decided to search other videos about him, just to see if what I was feeling was just about that particular performance or if it was about the singer. I’m just going to say that I spent a lot of time watching all the YouTube videos of David and I realized that he was special. Not only his amazing voice but something really touching and endearing about his personality.

David Archuleta ready for his closeup.

If I’m honest, I didn’t want to be a “fan.” I never was a fan of someone before and the word fan in my mind always had a pejorative connotation. But with David, I felt invested since the beginning. I didn’t know why, there was just something different about him. Now, I’m happy to call myself a fan for life of David Archuleta. He has enormous talent and he’s also a good person. He has a lot of charisma and for me he’s a leader, maybe a humble one but still. He inspires me by his positive attitude and his great (and uncommon) personality makes me forget, sometimes, that I’m first a fan of his voice (and his music)!

Also, I confess, I’m really addicted to his voice, I listen to his songs everytime for every occasions ! I know that can seem crazy but I like how I feel when I hear him sing, lol.

‘D’Arch’ de Triomphe
What’s it like being a David fan in France? Well, I thank God every day for the Internet, lol, and for the amazing fans who share their experiences, their videos, etc. … I feel less isolated.

I know other fans of David here (there’s a French forum about him, I think, and I saw one or two blogs). Some know him from AI (AI is not aired here, you can only watch it on the Internet), others thanks to the McFly tour and the Demi tour (Demi has a lot of teen fans here).

All my family and my friends know who David is and they like him too (my nephew even said once that he’d like to be David Archuleta when he grows up. He thought for a long time that he was a fictional character because he only saw him on YouTube, lol).

Also, being a fan in France can have its “advantage” (yes, I’ve found one. lol). I think it’s easier to promote him here. You just have to make people listen to his music and they like him. No AI stigma, no “he’s only for little girls,” no JB comparisons, etc. … It’s just about his voice! 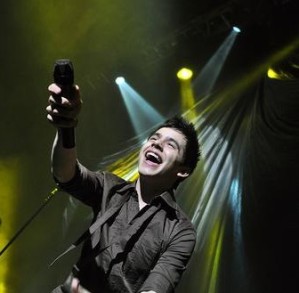 McFly
“There is nothing that compares to David Archuleta live”: I can’t count how many times I heard (read) that. So the minute I knew David was going to tour with McFly in the U.K., I couldn’t not go. It was my first chance to hear him sing live and I didn’t know if there would be another opportunity so the decision to go was made in a heartbeat!

I went to the show with my brother and two friends. My brother already liked him. He lives in The Netherlands so I emailed him regularly all D’s performances on AI while I was watching the program. My bro is more of an R&B/Soul fan and he thought that David did the best cover of “Stand by Me” he ever heard, so it was easy for me to convince him to come with me. My friends were really and positively surprised at how good he was live and couldn’t believe he didn’t win AI (I never told them before that David was a former AI contestant because they are music snobs, lol — they think the reality shows can’t produce real artists).

Now I can say it too: There is absolutely nothing that compares to David Archuleta live! He was amazing and the audience response to him was great. My only regret is that I didn’t meet him. I’m shy and I didn’t want to sound stupid with my bad English!

Pat-A-Pan
I was so excited the first time I heard David would be singing in French for Pat-A-Pan! It took me a week to listen to the entire song, I was repeating the first words in French again and again and again. I love his accent in French, it’s so cool. I ‘d love to hear more from him, like a French version of Crush. And for the first time, my nephew didn’t ask me to translate the lyrics for him (he sings all David’s songs phonetically, his current favorite is Elevator. Oh, and he can do a great impersonation of David, lol).

My hope as a European fan
I’d love to see David in France. He’d love Paris (not really for the people, lol, but there are a lot of museum and monuments to visit here !).

He really should come back to Europe to tour or just to promote his album. He already has fans everywhere here without any exposure (Italy, Spain, Holland, Finland, Germany, Ireland, Denmark, Romania, Bulgary, Portugal …) ! I hope that when he talked about an international tour in his last blog, it will include a visit to the “old continent”!

For now, I’ll keep on supporting him and listening to his albums, waiting for a second chance to see him live. I have great hopes for 2011 !

This entry was posted in Fan experience and tagged David Archuleta est magnifique, I felt unfettered and alive. Bookmark the permalink.