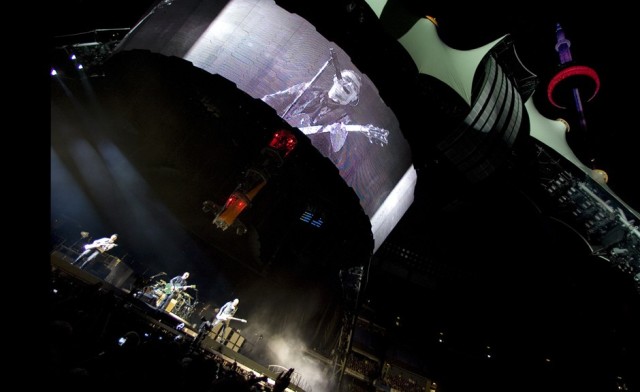 I’ve been to a lot of concerts over the years. Many I’d thought were big deals at the time. The Rolling Stones, Bob Dylan, Elton John, Elvis Costello, CSNY, Van Morrison … David Archuleta. But nothing really prepared me for the extravaganza, the event, the happening I attended last week – U2’s 360 Tour – the first of two sold-out shows at Toronto’s Rogers Centre.

Everything about the concert was SUPERSIZED — from the $40-million, 90-foot tall SET to the blast-you-from-your-seat SOUND to the star-filled SKY (the dome was open for only the second concert in its history). Even the PHILANTHROPY was extra-large (Desmond Tutu sent a video address, as did an astronaut on the International Space Station).

But although the music was grand and the spectacle grander, I found myself getting distracted. I couldn’t help but wonder, “Will David’s concerts get this big? Do I want them to? Does he?”

In fact, I looked down – waaaay down – at the mosh pit, longingly. Yes, friends, I had mosh envy – flashbacks to the squished, sweaty pleasure of standing mere feet from David’s feet, connecting with those green eyes as he sings, dancing and celebrating with the other moshers (moshees?), singing when told to “SING IT!,” doing the ZG bounce and sharing the “joyful sound” that Bono mentioned during this show.

But then came “I Still Haven’t Found What I’m Looking For”….

Opened by a drum beat alone, all 62,000 of us sang the entire first verse on our own. And unlike other concert sing-alongs I’ve been part of – every word was clear as a bell – and sounded fantastic. We were in perfect harmony. It felt magical, intimate.

Especially when Bono joined in, finished off the verse, then segued into Stand By Me. Then he stopped, pulled out his earbuds, stood back and listened to us all sing. Chills, baby, chills. (You can check it out in the youTube below.)

Of course, for me (and surely many of you), SBM is now David’s song. So when I found myself belting out “David’s song” with Bono (and, um, 62,000 others), that mega-stadium shrunk down to Crocodile Rock size and I felt connected to the music, the moment and every other person there.

Hands-down, my favourite part of the concert – and one I could see happening at a future show of David’s – even a supersized one.

With career prospects as rose-tinted as Bono’s glasses, David is destined to command similar arena-sized crowds in future. For extremely selfish reasons, however, part of me is happy that … for now … David is the best kept secret in pop music … mosh pit, here I come!

This entry was posted in Uncategorized and tagged 360 Tour, Bono, David Archuleta, Rogers Centre, Stand By Me, Toronto, U2. Bookmark the permalink.

24 Responses to Supersize me: U2 spectacle meets David’s SBM