“Cause you know I’d fly a thousand, 78 miles (or 1,735 kilometres) if I could just see youuu”……and I did just that last week … for a David Archuleta concert.

For three years I waited and hoped to see David perform at one of his Christmas shows.  This year I decided that I just could not wait any longer and made the trip from Vancouver to Los Angeles to see David at Club Nokia on his magnificent MKOC tour.  What an experience it was!

I finally had the most awesome experience of being there…..seeing him live and on fire with life, love, passion and the beauty of the season in his heart.

I was completely immersed in the moment with a very special young artist on stage. Interestingly, during David’s remarkable performance, I kept having visions of candles lit around the world, of hearts united in joy and peace. Okay, may sound a little corny but these feelings kept washing over me and I realized it was because David was really singing to the masses, adding his light and gift of joy in song to the world.  Many just hadn’t realized it.

The world is not the same because of it however and neither am I. Every nuance, every note left its mark and its vibration out there, in the world, in space and time, never to be erased just as it is never erased from your heart.  That was part of the beauty of it all.

David was in such fine form!  THIS, THIS is what I had waited for! My time had come and what a fantastic time it was!!  His sweet and lovable banter was just more icing on the cake.

I loved embracing every moment, his tremendous energy, his fun and funky upbeat, dancy tunes to his soulful, jazz (where does it all come from, whoa) to his incredibly joyful and lovable Fa La La La La with the kids (just loved seeing that live) and his most sacred, reverent, glorious renditions of beautiful Christmas carols.  David had never been better or sounded better to me.

Of course I can imagine that every fan who has seen him on this tour, anywhere. would probably say the same.  It’s as though he pushes a button in his brain and he morphs into a jazz mode, then pushes another button and he’s in pop heaven, then another and he is immersed in the classic beauty of timeless carols with the most masterful expression and delivery of each song.  How does he do it? Only one so gifted and versatile as David could master that.  And that Voice. It only seems to get better, really just left me in awe at how naturally and powerfully it flows. 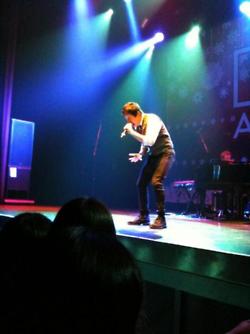 Every song was a special highlight for me with phenomenal vocals and heart but one in particular was extra special….his beautiful rendition of O Holy Night.  My favorite Christmas carol, I have always wanted (badly) to hear David sing that song live.  That night I finally had my chance to hear it.  It was the most gorgeous, moving, heartfelt, reverent and powerful rendition of that song ever, for me. One of the most beautiful sounds I have ever been blessed to hear.

That song was also one of my dear mother’s favourite carols (she passed away this year) and at one point during the song it almost felt as though David was singing that song for me and for my mother … and for anyone else whose heart was filled to overflowing because of it. I honestly cannot describe how it made me feel. It truly made this first Christmas without my mom that much easier and that much more joyful. All I can say is thank you David, from the bottom of my heart.  It meant a great deal to me, so very special.

What a joy to see David live on this Christmas tour, I had such a great time!  Next to me was a delightful younger fan who was as fan happy as I was. I love how different worlds come together (the younger and the older) the older being myself, when it comes to David and his music.  We both got into the songs (no I’m not too old yet) ha, rooted for David together and tried to decipher his “amazingness” through eye contact at times.

Met some very nice people and almost ran into (literally) Jeanette McCurdy during intermission.  She is quite adorable.  So sweet that she was there along with many of David’s friends and people in the biz.  David has left me with the most wonderful memories, etched forever in the cells of my brain and my heart.

My mother would always tell me to do the things that bring me joy, the things I love to do.  Did travelling to this concert bring me joy? Was it something I loved to do?

Oh yes….big time!!!  The best Christmas gift for me this year.  I am so glad that I flew those thousand and seventy-eight miles (or 1,735 kilometres) 🙂 to see David in action.

(oh…and the way David beats on that drum during the incredible LDB, the guy can play!  Have a feeling we might see him sitting behind a drum set one day and playing his heart out. It was the best encore)!  I can still hear the beats just as I can still hear David’s glorious voice in song.

Thank you David, your concert was nothing short of phenomenal for me!

20 Responses to A Thousand Miles: A Vancouver fan’s Nokia recap