Tuacahn: My Kind of Concert

Lucky us! David’s back. With a purpose. To write songs, to sing, to share his messages via his art, his way. Bravo!

TOfan asked me to write a recap as this is my first David concert since December 4, 2011, at the Sherman Theatre at Stroudsburg, PA. Yes, that was a stop on David’s “My Kind of Christmas” tour.  And yes, that was David’s music, his Christmas experiences expressed, his way.

With David’s decision to take a hiatus and pursue what is, from my understanding, a major milestone of his faith, it became routine to check in infrequently.  I am thankful to TOfan for her wit, charm and perserverance in maintaining  SnowAngelz and all the #utternonsense (her words 😀) she has posted through the years.

I attended Tuacahn Friday and Saturday nights with the lovely SnowAngelz themselves, TOfan and Refnaf.  After the Friday evening concert concluded, TOfan asked me what was my favorite  performance. And I couldn’t name one particular one. After digesting the whole experience for a bit, I believe my favorite performance was David, the entertainer, and the banter he obviously planned to share beyond his songs.

Ever the Message Man, he was determined to speak his prose, sometimes, yes awkwardly, and, now with an acceptance of who he is and how he speaks.  Comfortable, ever evolving, in his own skin. It’s his kind of prose, his way. Yeah, this was my kind of concert.

David waving at TOfan (not really).

If someone created one of those Word pictorials where all the words David spoke Friday and Saturday evenings were represented by size, the two biggest and boldest words would be Mission and Love.

That David is very proud of having made the decision and completed his Mission in Chile is obvious from all that he shared.  That it has shaped his future and changed him was the overarching message through out the concert.

And speaking of love, David took great care and made it a point both evenings to explain his kind of love, both to the oft shouted “I love you, David!” as well as his explanation of why he wrote and the meaning of “My Kind of Perfect.”  The lady who ends up on his arm will most definitely have an inner light, a sparkle in her eye, and a high level of self-awareness.  😍 However eye and hair color are immaterial and blind date phone numbers are not his way to meet girls.  👎  I’m really liking this “love” theme.  It’s purposeful and the message is clear.

As far as his song performances, I enjoyed all…yeah, I am always a little more the ballad lover.  “Forevermore”  and “Everyone Hurts” were sublime. “Numb” was fresh and catchy.

My thanks to the great and wonderful TOfan and Refnaf for allowing me to tag along and warmest regards to all the fans I met again or for the first time.  Hope to see everyone again real sooooooon at a David concert!

p.p.s.
Love this review! Powerless under the spell of The Archuleta!
“…By the time he lit into his cover of Keane’s “Somewhere Only We Know” he was sounding great and working the stage like a pro. And by his third song, “Don’t Run Away,” he was even bringing some powerful emotion to his delivery…. Still, I wanted to remain a curmudgeon. I had this idea in my head that Archuleta was overrated. But I found myself grudgingly applauding. He had earned it after all.”
Read rest here.

p.p.s.s.
My apologies to the lovely @Ktina702 (who snagged the Tuacahn setlist) for defacing it a tad: 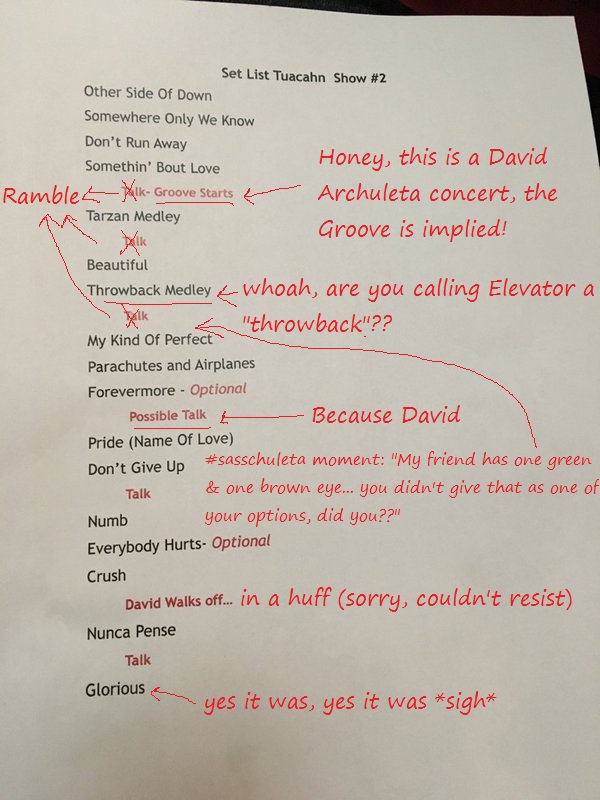 p.p.s.s.s.
We interrupt all programming for a hair report. There’s lots of it. End of report. 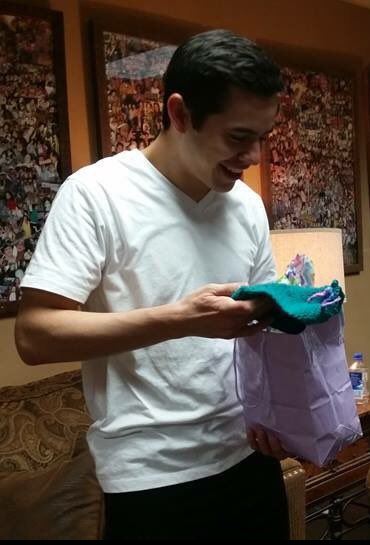 Saw this vet with the US flag saluting above the freeway on our way to the airport. One of the neatest things I've seen! As everyone was hurrying on their way to wherever they were headed, he stood there symbolizing to me the importance to not forget. It really touched me. Let us not forget our vets on this Veterans Day. We salute you vets and thank you for your sacrifice and service! Happy Veteran's Day. #veteransday #happyveteransday #vets #remember #USA

******
Another awesome interview!
He sings in Spanish! Is working on more Spanish music! Means so much to him that the fans stuck around for him! And any special someone? “Putting my feelers out there, I’ll just say that”

******
ANOTHER INTERVIEW! I NEED A B-12 SHOT!!!!
Numb: “Plan on releasing soon” AS;LDKFJDKFJALDSKFJLAKDJFALFDJ
Tour next year: “That’s the plan” ASDFKAJDFLKAJDFLAJKSDFLAKJF
EP? hmmm … I’ll take it!

“My darlin’, NO ONE has forgotten you” … LOVE THIS INTERVIEWER! WHY AM I NOT GOING TO MIDLAND?!?

This entry was posted in Concert recap. Bookmark the permalink.

35 Responses to Tuacahn: My Kind of Concert