New songwriter session is up!

I’ve been Patient (*hides*) and finally got to see the songwriter/producer Zoom chat session for my top fave song of the album (of the new songs, that is 🙂 )… PATIENT!!! … with the LA team of Chantry Johnson* and Kyle Neal.

(You can also watch HERE on D’s IGTV.)

Spoiler: Turns out Patient is about David and relationships. Did NOT pick that up from the song itself, lol. (David you are a sly one.)

Cowriter Chantry let that slip early in this chat and I swear you can see David blush when he mentions it. 🙂 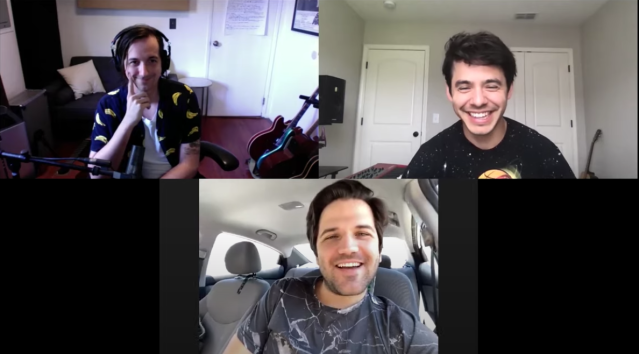 Loved when David played the sections with the birds tweeting in the background… HAD NOT NOTICED THAT!!!

And to think that he was still adding ad lib vocals as recently as early March???!!! Just before lockdown???!!! Omigosh, it really hit me how fortunate we are that he finished this album just in time or it would not be blessing our ears right now, when we need it most!!!

And not that I’m psychic but just yesterday I tweeted about how the Patient background vocals were blowing my mind! (Still are!) 🙂

Sidenote: WHO ELSE NEEDS TO HEAR THE UNRELEASED SONG “I’M NOT ALONE”???!!!!

Just putting it out there that since Therapy Sessions is only 10 songs (for comparison, Postcards in the Sky was a very generous 16)… wouldn’t it be great if David released a DELUXE version of TS next year (since COVID-19 totally stole his promo thunder this year 😦 ) with a few additional unreleased songs?? (Like he did with Winter in the Air??)TM

So, what about you guys?? Where does Patient rank in your TS faves list?? What was your favourite part of this songwriter/producer session?? Inquiring minds (MINE!) need to know!!!

*btw David’s face when Chantry was adjusting his car, or phone, or whatever, was priceless!

Also loved David’s insta live with Marie Osmond for The Talk (watch HERE). One part that stood out to me was when Marie asked him about how his anxiety and mental health issues were faring with everything going on in the world right now. It almost looked like David got a little choked up when he said that he’d been feeling overwhelmed, having panic attacks…

…and he said, “you feel the pain that everyone else is going through and I had to let myself just let it out, get my emotions out and shed a few tears to feel the pain we feel in the world right now, and I think you have to let yourself feel that, so you can be more understanding to everything going on, and make room for opportunity to…” and then Marie cut in… it struck me that he just released this whole album about his mental health struggles and so I’m glad he knows when to practice self-care and take a step back from social media, even if we miss him when he does. ❤

16 Responses to New songwriter session is up!