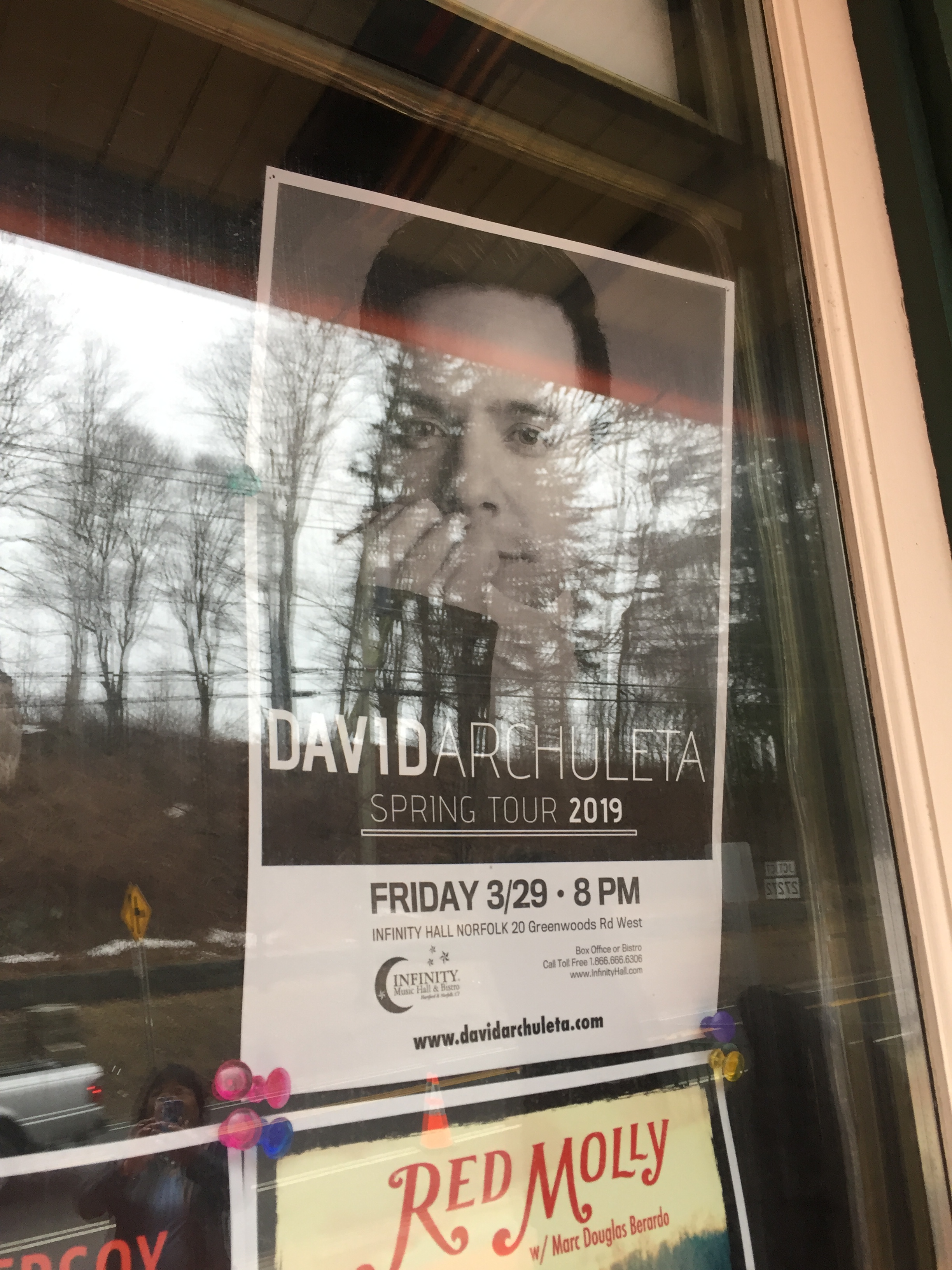 Whenever David Archuleta starts a new tour, we fans always declare it “best tour ever”… that’s because it is! The man ups his game every time and this new Postcards tour is no different.

I was blessed to attend the Boston, Norfolk and Sellersville shows the past few days and had both my socks blown off, and much of the top of my head. I had only seen snippets of songs here and there so much of it was a complete surprise. And wow. Just wow.

It all started in the Boston VIP, where David’s acoustic version of Postcards brought me to tears. It was just so beautiful and the power and meaning behind the song just really hit me. Oh how I wish I had video for you, lol.

I think my favourite VIP question was about Chords of Strength, which the young lady who asked the question said she’s read about five times. She asked David what was his favourite part about writing the book? “Finishing it,” he said, cracking us all up. He explained that he had help with the book and, at the time, felt he was pouring his heart out in his music, so why did he have to write it all down. 🙂

The City Winery was lovely with the venue in a separate space behind a full restaurant in the front. Before they opened the doors for the show, they played David’s debut album and TOSOD over the sound system throughout the restaurant. The manager told me later they like to do that to support the artists they bring in. David sure sounded great wafting through the place. 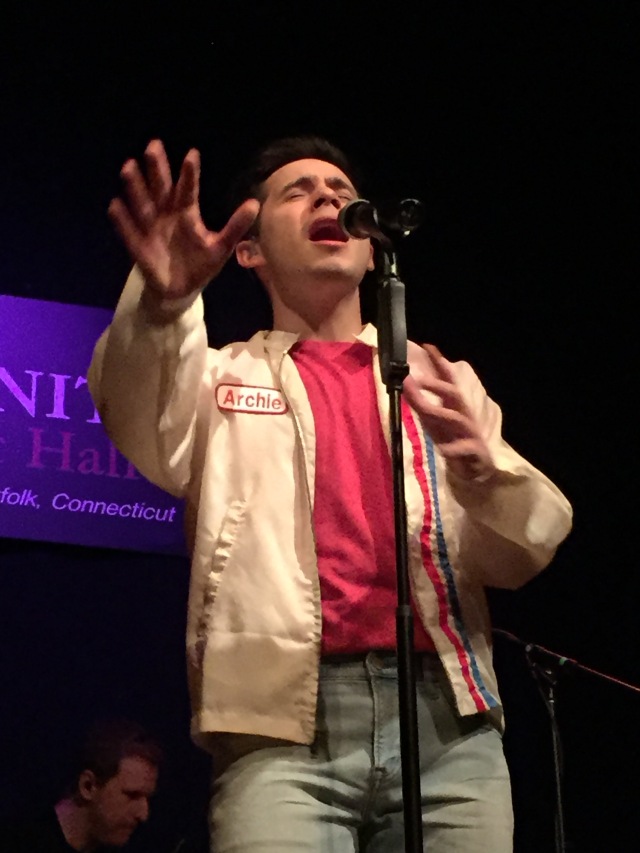 I still can’t get over how amazing this show is. The new arrangements, the flow of the songs, the mashups, the way it’s been carefully crafted to build into a crescendo of awesomeness. To me, the whole show had a playlist feel to it, weaving in and out of songs and the “postcard” messages David has strategically positioned throughout the set list.

I’ve obviously loved David’s shows for his amazing songs and stories and vocals but this is the first time I’ve marvelled at the artistry of the show itself. How every element of it contributed to his overArching theme (* hides *).

And who knew Waiting in the Stars was the banging show opener we never knew we needed??! … you guessed it, G.E.N.I.U.S.!!

And in Boston, during Postcards in the Sky, when everyone started waving the postcards that Amanda (@LangoneLady), Melissa (@melissad309) and Ashley (@Palrice8) (sorry if I’m misspelling anyone’s name!) had carefully made and handed out to everybody, David’s look of surprise and “Cool, I wasn’t expecting that!” was priceless.

The emotional power of Glorious fused with You Say made me cry Every. Single. Night. Those songs were speaking to ME about ME guiding ME, comforting ME. I almost turned around to make sure other people were hearing MY songs. For real.

And then, still all choked up, he starts singing Shine A Light, my second fave on the album (after Postcards), which I did not think he’d be singing… SOMEONE HAND ME AN ENTIRE BOX OF KLEENEX!!!! … sidenote, I take full credit for putting my phone flashlight up in the air during the chorus and starting it off, and then David suggested everyone do it…  *bows*… it was soooooo magical… David had told us that the parents of his co-writer on the song, Isabeau Miller, were in the audience, which made it even more special.

PARALYZED GETS ITS OWN PARAGRAPH!!!!!

THIS SONG. THIS SONG. GAHHHHHH…”obsessed” doesn’t even begin to cover my reaction… did NOT see that one coming at all. It’s like “Take Me to Church” meets Imagine Dragons meets Buffy the Fan Slayer … like whoah!!!! (see how out of actual words I am rn?!)

That song belongs on radio STAT!!! The groove of it, the power, the lyrics we can all relate to, the way David lets his voice fly.

I need it in my phone so I can stop people in the streets and put headphones on them and push play because they need to hear it. (Several restraining orders currently prevent me from doing that.) It’s THAT good.

At the Sellersville VIP, my two favourite questions were:

I was just so happy to hear David declare out loud to all of us there what he’s aiming for. Saying it is halfway to doing it. And it just shows a huge leap of confidence, imo. He didn’t say it in a boastful way, but just simply and honestly putting that out into the world.

All of us have always known that he belongs with the best of the best recording artists out there… that he’s more talented than many of them, in my view… but to hear him acknowledge that that is where he belongs… I wanted to leap out of my seat and scream “YES!!! YES!!!! YOU GO, DAVID!!!!” (I did do that in my head, however.)

Sidenote: Continuing in my long-standing tradition of awkwardness where David’s concerned, when we went up for the photo at VIP, David was on vocal rest and couldn’t talk but 100% forgetting that I blurted out, “Hey, how’s it going??” Then remembered he couldn’t say anything so I just told him that Paralyzed is crazy good… I believe my exact words were, “crazy crazy crazy good”… but he was probably thinking, “crazy sounds about right”. 😆

It was amazing to see so many lovely and amazing fan friends… some I hadn’t seen since before David went on his mission… even some folks from back in the Noting David days, like Abrra, and Bebereader and SilverFox and SandyBeaches, Amb4DA, Astrid and DJbell and River and Marlie and just everyone. {{{{{{group hug}}}} 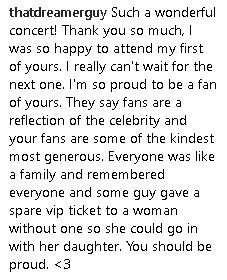 Sorry this is so long… I will add things in the comments if I remember anything more.

You can find incredible vids on the illustrious DJbell’s youTube channel HERE. About to go into a David Archuleta concert and I can hardly bear it. *hides*

This entry was posted in Concert recap and tagged David Archuleta, Postcards in the Sky. Bookmark the permalink.

29 Responses to That time David Archuleta almost killed me