**UPDATE**
I took this video on my iPod at the Friday night show (because I loved the song so much Thursday night)… I’m sorry, I can’t do closeups on it but the audio is pretty good, I must say… still gives me chills AND makes me choke up all at once, I think because of the raw, real feeling in it and because I love it so much… it was our soundtrack on repeat from Idaho to Utah so, David, if you had wanted to do it Saturday and Monday, at least four of us totally knew all the words and could’ve jumped in. 🙂 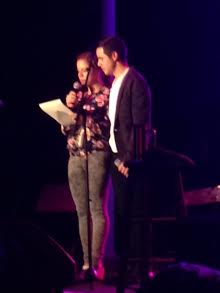 So sad this run of “warm up” shows are over… but so relieved David’s on the mend.

It was really cool tonight to hear him change up songs we’ve heard a million times … I know it was to spare his voice but his variations gave songs like TOSOD and SBL a new groove and showed off his lower register, which still sounded mighty fine, despite his illness.

He really is incredible, finding every way he can to give the best show he can. He brought his sister, Jazzy, onstage to “be David” and read his introduction to “Beautiful” so that the message behind why he recorded the song wouldn’t get lost.

And then somehow he managed to do an amazing job on Beautiful, complete with new runs and so much emotion. Loved it.

He brought Jazzy out a few times and then had more to say before Bridge Over Troubled Water but wanted to spare his voice… reaching out and saying “I want to talk to you guys… but I want to sing too.” It was so touching the way he sang it, it’s not one of my faves on Begin. *hides* but maybe now it is.

He had to cut the show a little short but, man, did he pack a lot in. And the crowd was fantastic, right behind him… standing during Crush and waving phones in the air.

He got emotional a few times, but managed to collect himself and keep on going… even coming out for an encore of Nunca Pense with his mom and aunt as backup singers and dancers, he had to encourage them to move up nearer the front of the stage and Lupe even pulled a little boy up onto the stage with them and he sang a mean “oh oh ooh oh oh”. 🙂

Glorious was glorious and he sounded incredible. Something about the audience singing along like a choir with him is magical.

I’m probably forgetting something because I’m fried but feeling relieved he can rest now… and so can we, lol.

I feel incredibly blessed to have been able to experience these first shows in four loooong years… Thursday night, in particular, was really special… and to see David go from tentative and anxious at the beginning of Thursday night to under-the-weather but relaxed, having fun and interacting with the crowd like crazy by Monday night … and it sinking in that we are still here cheering for him… was beautiful to see.

I can’t take good photos or vids to save my life (I’m so thankful for those who do have those talents) but I want to remember more so I can share as much as I can… wish I could have taken you all there in my pockets! I’ll keep adding tidbits as I remember them…

Starting with these highlights:

– Kendra and the band playing the Super Mario theme song and David coming out and saying “If that music had words, I’d totally sing it for you guys”

– that “shoo bop she do” song from Tarzan… loved it from the 1st night and SO wish I’d recorded it Monday night even on my iPod… he KILLED it! No sign of flu on that one… loved what he did with it…. and his dance moves! 🙂

– David saying “going to do a few more songs for y’all” then chuckling and adding, “I live in Tennessee now so I say ‘y’all’, heh heh”

-the way he moves on stage now is light years away from four years ago…singing with his entire body, organically letting the music move him — literally. I swear, between the cool arm movements and new steps, Thursday night’s “Somewhere Only We Know” was like an interpretive dance.

And deep thoughts like these:
– “When you stop thinking about yourself, you discover who you are”
– “I always thought music was a part of my mission but I couldn’t be satisfied with my mission in life if I hadn’t gone to serve for two years in Chile” [David chokes up and so do all of us]
– “If we choose to help someone it will have an impact — not just on other people, but ourselves.”
– “Even though I’m not 100%, it’s been fun and your energy is breathing some life into me.”
– “If a song is filled with light, it fills you with light”[before the medley] “Fans who’ve been around a while and know the words, sing along, I need your help here, and sing loud!”
– “Not performing my own shows for four years, you don’t know who will still want to come and are interested in listening” [this is followed by huge applause… “we are, David! we are!” we all seemed to be saying]
p.s.

Last night was the last show of this first 4-show run. Thanks to the band and my family for their help on our 2nd night in Layton, Utah! Thanks everyone for coming out to the shows and still wanting to listen to me after almost 4 years!! Looking forward for the next ones! #concerts #band #family #kenleytheater #Layton #Utah

So glad I got to go listen to @DavidArchie tonight you did beautiful. pic.twitter.com/QKIZDOZWpT

I Love this one of @DavidArchie and Jazzy:) pic.twitter.com/i5SqAn5nrJ

//platform.twitter.com/widgets.js
.
I’ll leave the last word to Marcella… this sums things up perfectly:

I love all these @DavidArchie shows..each one with it’s own little twist..just like old times ☺️

//platform.twitter.com/widgets.js
.
Posting this again because Canada. 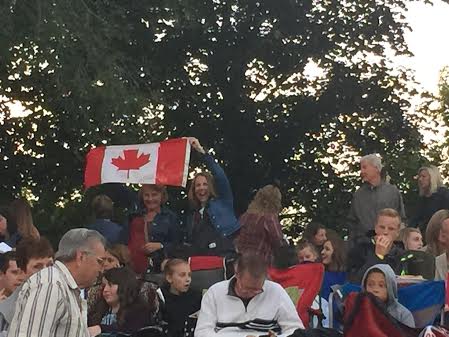 You guyyyyys, it’s been so long since I’ve used the “Concert recap” category, I forgot it was even there. *sniff*

This entry was posted in Concert recap, Fan experience and tagged David Archuleta, King of Everything. Bookmark the permalink.