40 Days of Awwwsome: Flashback to @DavidArchie fandamonium at KL school 2009

He arrived in front of the school at 2.00pm or so? FYI, the guy in the red t-shirt is David’s bodyguard.

This was taken by Chien Teng in the function room. Waiting for him to go up for photo & autograph session.

The lucky ones who got to take picture with him. Including Shi Jie. f*** you. 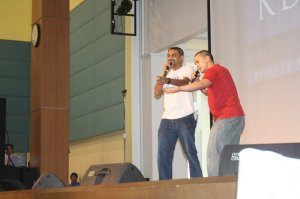 JJ & Ean, being the MC of the day. Lying to us that we got 2nd place & David’s in another school singing at that time.

They said that they’re sent to our school to play games with us. Which 3 chosen students will sing 1 of David’s songs. The person who sings the best will get a pass for David’s concert in Sunway & a free album.

And David came on the stage after that.

Questions time. David got straight As for his exam, he loves Paramore & he had vocal paralysis.

Then, he started off with the first song “Crush”. He’s walking towards my side thats why he’s so damn near. I was right in front of him 🙂

Followed by “A Little Too Not Over You”. Walking towards another side of the crowd.

Only 2 songs. Cause’ he was rushing to somewhere else.

Our school gave him a big teddy bear for souvenir.

Before he left the school, he went in to the toilet and saw the cleaner inside. He shook her hands and said : “Thanks for keeping the school clean.” Damn cute right? 🙂

Here are some videos of the whole event, enjoy :

This entry was posted in 40 Days of Awwwsome and tagged David Archuleta thanks school cleaners bettah. Bookmark the permalink.

7 Responses to 40 Days of Awwwsome: Flashback to @DavidArchie fandamonium at KL school 2009