I think every David Archuleta fan knows that Imagine Dragons’ lead singer Dan Reynolds (a friend of David’s, btw) served a mission before the band was formed.

Here’s an awesome interview with Reynolds. If anyone’s wondered how David will fare in the wacked out music industry when he gets back, this interview may shed some light on how that could work. Enjoy! 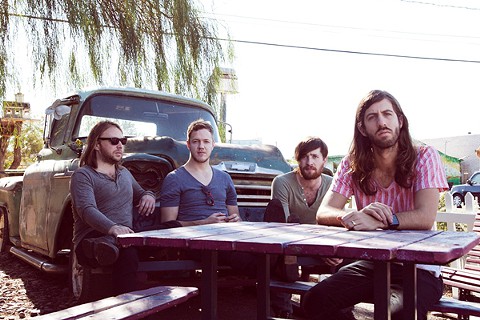 The hit musical “The Book of Mormon” might make fun of dress-shirted representatives of the Church of Jesus Christ of Latter-day Saints naively trying to save souls in war-torn Uganda. But to Imagine Dragons bandleader Dan Reynolds, a longtime Mormon and Las Vegas native, it’s no joke.

Describing his two-year mission to Omaha, Neb., at age 18, he says, “It was like going to another country. When you’re sitting down with a single mom whose husband left, and she’d been beat up by him, and she has no way to provide? And you’re this kid in a stupid white shirt, trying to figure out a way for them to make money and get her off addiction? When you do that, you grow up fast.”

Reynolds – who brings his group to The City this week, backing its chart-topping debut “Night Visions” – also worked with farmers, signed on with a veterinarian and helped transform strangers’ lives in ways he never would have imagined.

“It was such a growing experience for me, and it humbled me and made me realize that the world’s a lot bigger than where you’re raised,” he says. “There are people dealing with so many more problems than you, and it makes all your problems seem really small. So you just forget all about yourself.”

Reynolds’ missionary garb was regularly pelted with Slurpees from passing cars in Nebraska.

“But when I got home, I saw the world in a different way – it was more important for me to do something positive than to be cool,” says the singer, who penned his band’s breakthrough anthem “It’s Time” at his lowest, most depressed point. “I was dropping out of college, I was not happy with who I was, and I wanted to make some changes,” he says.

Putting his fears and frustrations into songs, Reynolds formed Imagine Dragons (the name is a secret anagram) with his old college chum, guitarist Wayne Sermon, and started penning spiritual-themed stompers like “Demons,” “Radioactive” and “Hear Me,” which they tracked with producer Alex Da Kid on their Interscope-issued album.

Reynolds is a remarkably mature 25. He married his sweetheart, Nico Vega’s Aja Volkman, and the couple – who record together as Egyptian – just had a baby daughter named Arrow.

After his missionary eye-opener, he says, “If you’ve got food, a house and people that love you, you’ve got a lot more than 90 percent of the world. So we’re definitely blessed.”

p.s. in another interview a friend sent to me, Reynolds says, “I think we try to write music that takes the listener through a whole range of emotions. Some songs are sad, some are uplifting, some are introspective. Above all, we try to write music that helps people cope with what can be a very hard life at times. We want to connect with the listener through the only means of communication we understand — art.” Sound familiar? 🙂

This entry was posted in Music review and tagged David Archuleta, Imagine Dragons. Bookmark the permalink.

13 Responses to From Mission to Music Career: Interview with Imagine Dragons’ Dan Reynolds