Just when you thought it was quiet in David world

Sorry, ladies … David Archuleta seems to be off the market.

Reports from the Washington Daily News yesterday (July 5, 2013), suggest the singer best known for his hit song Crush has secretly got hitched to his long-term relationship.

Intimate Ceremony with Family and Friends

There had already been speculation that the loved-up pair were set to announce their engagement but it sounds like they might have just jumped straight to wedded bliss! The paper says the singer has been spotted wearing a new wedding ring earlier this week.

The couple is said to have exchanged vows in an intimate morning ceremony at a secret location, before few close friends and family members. 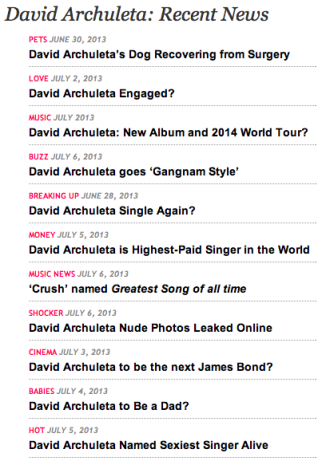 “They certainly looked like a happy couple” a close friend Tweeted on Friday (July 5). But was he referring to the supposed wedding, some fans wondered. David Archuleta “secretly married” rumors have caused quite a stir among fans.

“Is it official? There has been so many rumors about David Archuleta” — July 5, 2013

Was there a secret wedding? That remains a mystery for now, as the singer’s rep hasn’t commented, nor the couple released an official statement yet.

Do you think David Archuleta have secretly wed?

Hmmm. He’s certainly come a long way since this story. 🙂

This entry was posted in Utter nonsense and tagged David Archuleta I dos it bettah. Bookmark the permalink.