A special @DavidArchie B-day story for the lovely Ms. Refnaf!

In honour of your love for all things Lord of the Rings, here’s a little David Archuleta-themed Frodo-esque story for your special day! 🙂

As David the Humble humbly swaggered his way through the Shire, he had a song in his heart … make that two… or maybe six.

He loved to stop and sing at each cottage he passed, especially if a widow or orphan lived within … or a feisty daughter of a prostitute who liked to fly kites.

But on this day, David the Humble had no time to stop and serenade the shirefolk. He had an important mission he was tasked with… no not that mission, another mission.

‘Twas up to him and only him to take the powerful ring to Mount Doom. Yes! The Ring. The precious golden orb engraved with the letters CTR…

…not because of its powers but because he saw a notice on Craigslist that someone lost it and even though the guy lived 1,000 Miles away, it was the right thing to do…. plus, there was a reward:  free dragon rides.

Humble David tried wearing the Ring on his right hand for safekeeping but couldn’t stop playing with it. His hand broke out in a rash — worse than when Paula Abdul gave him that sparkly bracelet after Hobbit Idol.

He hurried back to his cottage to ready for the journey. He filled his satchel with mangoes, almonds, 30 Costco sample cups of Kashi cereal, and his trusted copy of The Alchemist … not to read, but as a weapon… he’d sprung for hardcover!

As he entered the enchanted forest, he sang quietly to himself to steel his courage. Two verses of “Wizard Moves Like Jagger” and the chorus of “Everybody Wants to Rule Middle-Earth.” Now he felt ready to take on any foe… except maybe Nicki Minaj, she frightened even Voldemort (oops, wrong book).

At the edge of the woods, our skinny-jeans hero spied a tiny, familiar face!

The squirrel scurried over. But as David the Humble bent down to give Almond an almond, the irony struck him and he spontaneously belted out “Isn’t it ironiiiiiiic?!” Shaking the leaves on all the trees.

Denied his promised snack, Almond was furious. His eyes flashed as red as the fiery pits of Mordor and he glared at the golden Ring. Almond lunged onto Humble David’s hand and tried to pry off the Ring with his uncommonly long squirrel fangs.

After a struggle, Humble David hit Almond with an oar, gave him a glare that would melt ice, called him a hob-knocker, and flung him off into the forest. Then he ran cross-country all the way to Mordor… with only one minor collapse and a rest stop at a welcoming medieval medical centre in the glens.

Out of breath and sweating like a wild boar, he finally reached his destination, tossed the ring at its owner and they all lived Hobbitly ever after. 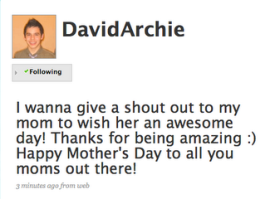 This entry was posted in Utter nonsense and tagged David Archuleta is what's precious. Bookmark the permalink.

31 Responses to A special @DavidArchie B-day story for the lovely Ms. Refnaf!