Last weekend, I had the opportunity to go see the one and only Justin Bieber live in Toronto.  Now, just to be clear, Justin is not high on my list of favorite singers….in fact he doesn’t even make my list but my daughter Taylor is his Number 1 fan (self-proclaimed btw) and since she attended David’s concert with me in Verona last December, I had promised her that I would go to a Justin concert. Plus, I really wanted to see what the all of the hype was about. 🙂

What exactly is it about this kid that makes him an international phenomenon?? I’m thinking surely he must sing better live than recorded because I obviously don’t hear what the rest of the world is hearing…..David can out-sing this kid by miles but where is David’s super stardom? Is it Justin’s personality? Is it his looks?  Is he really that great of a singer? Recently Oprah compared him to Elvis, The Beatles and Michael Jackson….HUH!?!?!!!

I did a little comparison while I was there of a Justin concert vs. a David concert.  My daughter and I have two totally different ideas of what a concert should entail…..and there were many differences between the two!! I’m basing my information mostly on the one and only David concert I’ve been to which was at Turning Stone Casino in Verona, NY for the MKOC tour. So here goes!!

1)      The number 1 difference is the sheer number of people attending the concert!  The venue at Turning Stone holds 800 people….the Rogers Centre in Toronto holds 55,000.  Justin’s concert sold out all 55,000 seats within 10 minutes of going on sale!!  I know David has done many concerts with larger venues than Turning Stone but nothing close to 55,000 seats.

2)      With numbers like that, it changes the whole feel of the concert.  At Justin’s concert, you could feel the electricity in the air as soon as you walked in….fans were screaming constantly whether there was anyone on stage or not.  Even non-Bieber fans like me and my friend were finding ourselves getting pumped for the show.

3)      Another big difference I noticed was the age of the fans!  Justin’s fans consisted of kids from ages 5 to 18!!  Most adults were there to accompany younger children to the show!  My daughter actually commented on that when we were at David’s concert….she noticed that there were not too many kids her age (18) and said that most of David’s fans were…uhmmm….old!!  (Excuse me Missy….who are you calling old?!!!)

4)      Justin does not do his show alone….his opening acts were The Wanted, Cody Simpson and Carly Rae Jepson and Drake made an appearance during two of Justin’s songs.  He pulls some big names in with him. (Side note….I loved The Wanted!! I could have listened to them all night J)

5)      Justin does a major production!!  He had a DJ between songs to keep the crowd pumped! There were dance numbers with many dancers that were amazing! The lighting was awesome!! Now that being said, during the dance numbers, Justin does not sing live….he lip synched through the songs! I have huge issues with that….my daughter did not!! In her words…”how do expect him to sing and dance at the same time??”  My words….”I’m sorry but if I’m paying hard earned money to go to a concert, you better sing to me!!”.  Give me David bouncing around the stage any day….he can move and sing at the same time while still sounding amazing!!

6)      David talks to his fans between songs…..Justin screams to his….just to get them to scream louder for him!! And they do…very loudly!! I found this very annoying….and nope, it’s not because I’m “old”!!!  I got the impression that everything about Justin is just that…..about Justin!

7)      And the final difference, which was a MAJOR issue for me!  Justin Bieber cannot….I’m going to repeat that…CANNOT sing live!!!  OMG!! My mouth dropped to the floor when he started singing his first song….he sings very high, very pitchy and very off key….it was just awful!! But 55,000 fans (minus at least two because my friend was just as dumbfounded as I was) were screaming and cheering the whole time!! I found myself wanting him to lip synch!!  I can’t for the life of me figure it out….either they couldn’t hear how awful he sounded over their screaming or they just don’t care!!  I was counting the minutes until the show was over!  I just don’t get it?? I promised Taylor I would go to a Justin concert…..I did….and I will never go again!! Like never….EVER!!

I asked Taylor what her opinion was of the difference between the two concerts.  Like I said, she’s Justin’s #1 fan so she’s sticking with him but she does listen to David’s music a lot! She told me that she really enjoyed David’s concert because there was no-one pulling her hair or pulling at her trying to get in front of her to get closer to the stage.  She was in awe at how he sounded live…way better than she could have ever imagined!  She left the show with her heart pounding like everyone else there J  Oh and her face dropped when he came out on stage…..all I heard her say was…”Oh my God he’s gorgeous”! 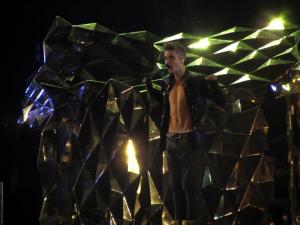 Disclaimer: This picture is only here for contrast sake… i.e., don’t expect to see it again. Ever.:)

But….there was one difference that she pointed out….she thinks David wears too many clothes!! (See the top pic versus this one, on the right, lol.) So I guess that’s what it all comes down to for these teenagers lol.  Who cares if they can carry a tune!! I do have to admit though….when I was in Verona, I wanted to quietly slip up onto the stage when David was singing and take that scarf off of his neck…it was overload!!   LOL

So I guess if David really wanted the super stardom that he deserves, then he would do what all the other young singers are doing….strip down, party in the right circles, throw his morals into the back seat for a while, etc, etc, etc.  But he doesn’t and I for one love him that way.  No way will I ever become a Belieber….I’m very happy with my Archie family and friends and will be devoted to this man as long as he is willing to share his life with us, scarves and all. 🙂

This entry was posted in Fan experience and tagged he's got that pressure that David Archuleta. Bookmark the permalink.