The lovely @weiyannn in Singapore just got BEGIN. today … I believe she speaks for all of us. 🙂
(Tip: Read from bottom up.) 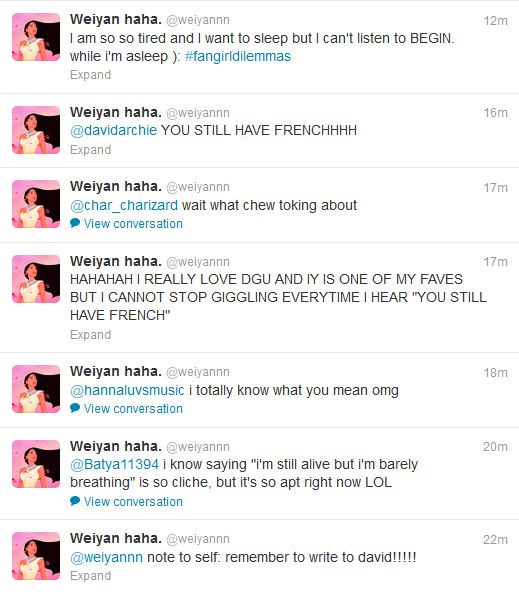 @DavidArchie I wrote this while I was in twitter jail lol. I finished listening to BEGIN. in it’s entirety and I don’t really know what to say. I didn’t shed a tear, until it reached Be Still, My Soul, which is quite shocking because I am very much the crying type haha.

I feel like I should say something about this album, but I don’t dare to say anything, lest it comes out wrong and what I feel isn’t put into words the right way. David keeps saying that he hopes we can feel his heart in the songs, and yes. Yes. Yes. Yes.

When listening to Broken for the first time, I was actually left speechless. (Maybe it was because of the lack of an intro and his voice came so unexpectedly.) But I didn’t really know what to say, because. I don’t know, there’s just something about it. His voice doesn’t soar in that song, like in Bridge Over Troubled Water or Beautiful, and I didn’t really catch much of the lyrics. Something else captivated me and I think it was HOW he was singing the songs. I don’t know what the lyrics are, and what they mean, but I feel like David WANTS to do good in this world. Like so bad, he’s almost a little desperate. His heart is so pure and good, I can actually feel it through the songs. (I don’t know if I’m the only one feeling this way, and I’m actually feeling the song differently from others? Lol.)

And like I mentioned earlier, I only started crying when it was Be Still My Soul. When the first line started, I got a flashback from that Idaho show when he sang it live (I wasn’t even there, sheesh.) and when he started tearing up. It reminded me of how much he loves God and how he was actually grateful for everything to a point where it brings tears to his eyes. Which is why he’s out there in Chile now, having willingly left all he had just so he could serve his God, and give back all he can. I’ve said this countless times, but his faith is truly admirable. I really cannot put into words how proud of him I feel, for following his heart and being where he is right now. (And also for all the hard work he put into making this album.)

I just lost my train of thought, lol. (I’m listening to Bridge Over Troubled Water now. Wow.) I really really love this album. Even though it’s so far away, physically, having this album in my hands and the songs playing from my speakers, he feels closer than ever. I don’t know how to explain that exactly, but he feels so so near, as if he never left, in a way. (I’m starting to think I sound a little crazy.)

Before I go crazy, I just wish I could let him know how much I appreciate this album and all he has done for us. I cannot wait for 2014 to come, and I need to remind myself to give him a giant suffocating (not literally, I don’t want him to die lol) hug.

Everything else I am feeling is impossible to be worded so. I am done. Lol. I am such a sappy fan. #DA2014 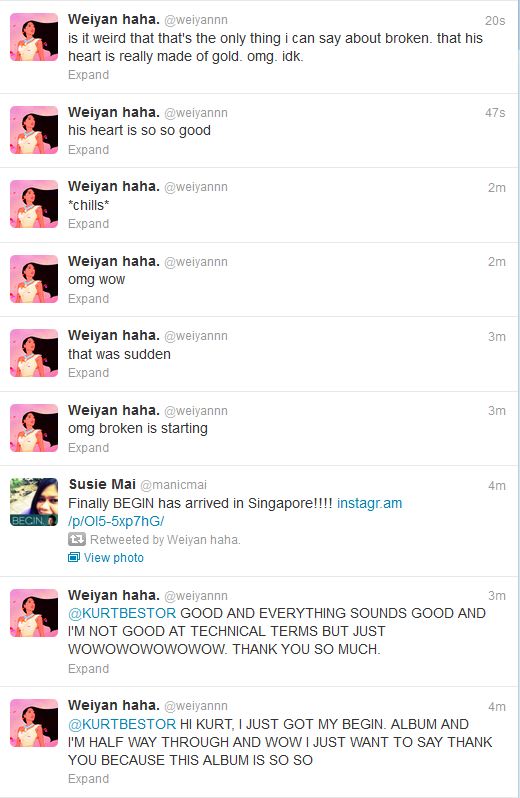 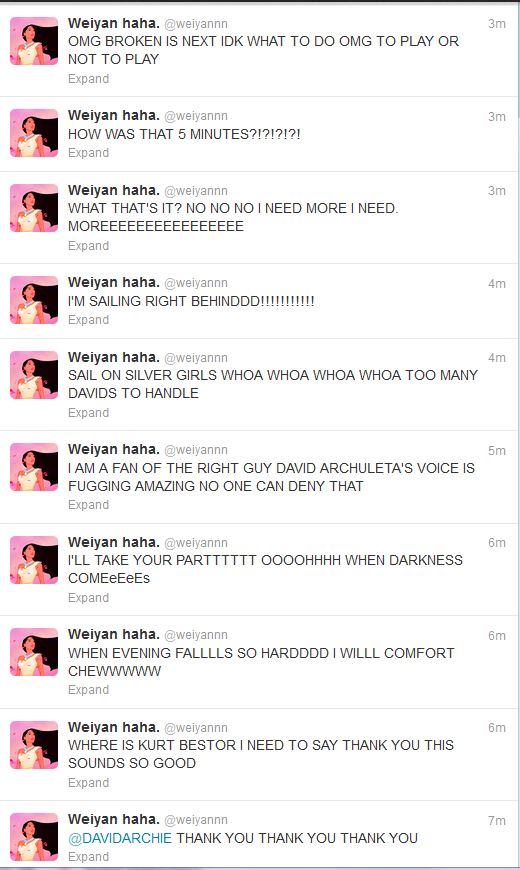 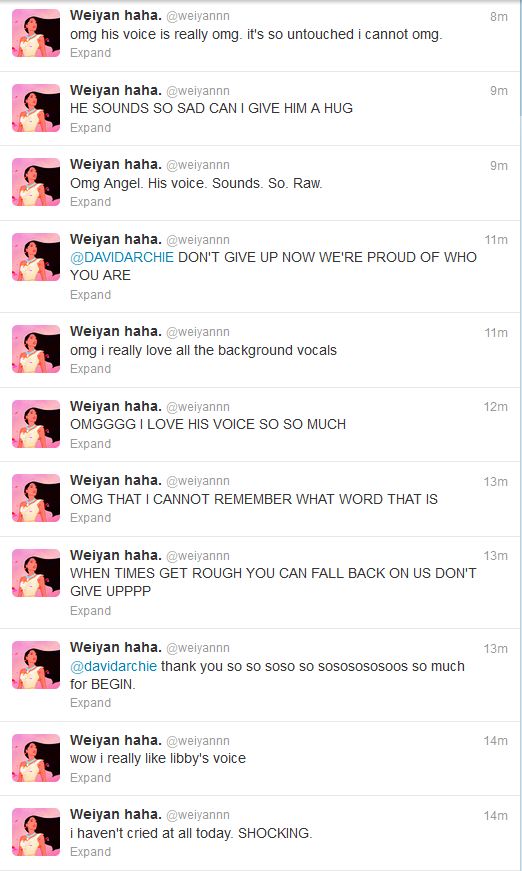 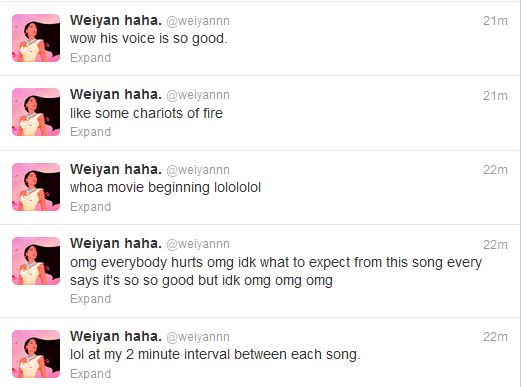 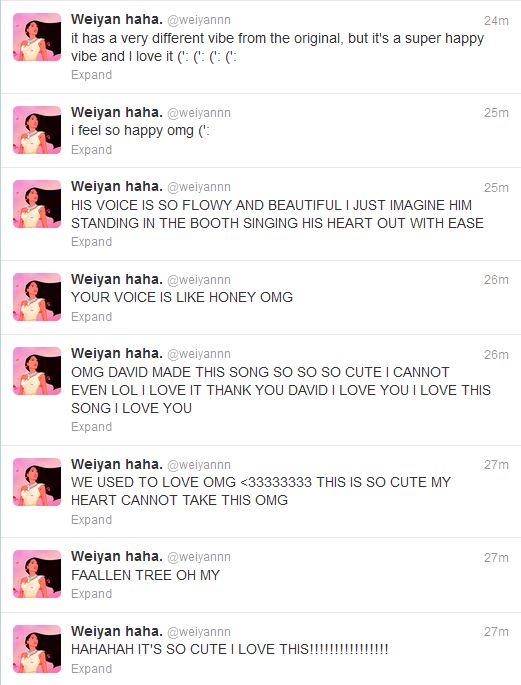 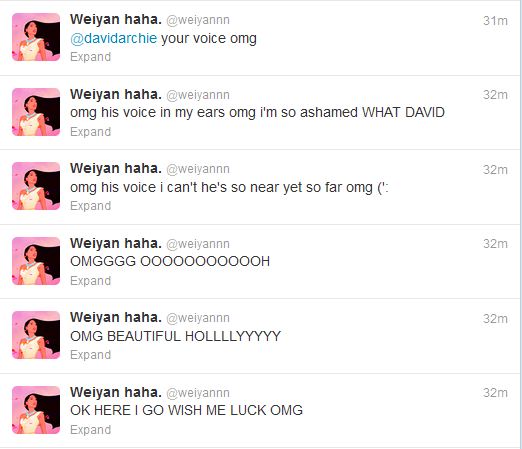 This entry was posted in Fan experience and tagged BEGIN., David Archuleta. Bookmark the permalink.