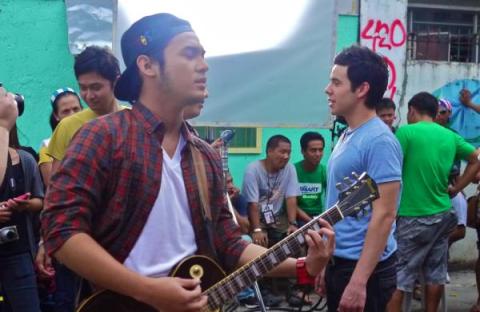 Twitpic from the lovely @anagfeleo

SALT LAKE CITY (ABC 4 News) – David Archuleta made his television debut on Star Search in 2003 at age 12. From there, he performed on ABC 4’s “Good Things Utah” the following year. He then went on to compete on “American Idol” where he finished 2nd.

Now, ABC 4 has some big news for fans of the young singer.

The producer’s name is Kurt Bestor, another beloved Utah artist.

“We were frantic to get it all done before he went on his LDS mission.”

Archuleta is believed to have been assigned to a South American mission in Chile.

But Bestor says the two worked together right up until the night before Archuleta left,

“I have to say I was a little hesitant to do it, but now that I have had a chance to work with him for that intense three weeks, the kid’s amazing.

Bestor says the result will be an 11 song CD to be released in June or July.

Bestor, a Grammy nominated musician says it will contain amazing songs, ones that people will know and love,

“The kid is really kind of a phenom and I don’t think people really realize it.”

And while Bestor may not have meant to, he did let one the name of one Archuleta song slip out,

“I just did a version of “Bridge Over Troubled Water…Oops! That’s on the new album, David Archuleta. Nobody knows that.”

Now, to see our entire interview with Kurt Bestor – and the rest of his comments about David Archuleta – tune in to “On the Record.”

This entry was posted in Music review and tagged David Archuleta is trendy. Bookmark the permalink.