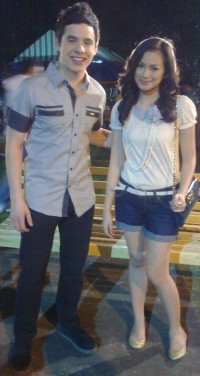 The amazing @lorms translates this PHP.ph interview with Eula Caballero:

It was a touching goodbye for Eula Caballero and David Archuleta at the set of TV5 mini-series Nandito Ako.

Eula relayed to PEP.ph (Philippine Entertainment Portal), “What I appreciate most was the depth of his character.”

“It started with light conversations. ‘How are you, have you slept well?’

“‘Then we started talking about family… then you find out the kind of person he is.

“I also asked him about his mission.”

Eula was referring to David’s two-year mission with The Church of Jesus Christ of Latter-Day Saints.

The young Kapatid actress continued, “He said, ‘I’m happy to do this for my religion.’ [He said] It makes him whole.”

“He also said, ‘It’s just making me sad because I’m afraid that everyone might move on with their lives without me.’

“And that we should get used to not having him around since two years is a long time.”

“Especially for his sisters, one of his sister is turning sixteen, the other one will join junior high, he said, ‘I wish I could be there with them when that happens.’

“I was in tears when he said that coz he, too, got teary-eyed.”

Eula added, “He has such a deep personality, he has so much on his mind… his family.” 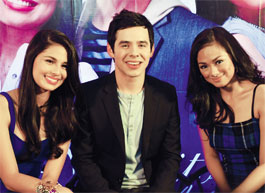 MANILA, Philippines — The past month has been replete with new milestones for American Idol grad David Archuleta.

For one, there is his first turn as an actor for the new TV5 serye “Nandito Ako” alongside local talents Jasmine Curtis-Smith and Eula Caballero.

The 21 year-old also recorded his own version of the song “Nandito Ako”, a bestselling tune that was composed by Aaron Paul del Rosario and first popularized by OPM legends Ogie Alcasid and Lea Salonga. The only other foreign artist to record it was Mexican songstress, Thalia, and it resulted in a bestselling album for her here in the country.

By next month, Archuleta will be experiencing yet another milestone as he takes a two-year break from showbiz to become a Mormon missionary. Just like his decision to pursue acting in the Philippines, it’s not the most conventional way to go about with a Hollywood career – but that’s exactly how Archuleta wants to do it.

“It’s always a scary thing when you make a decision that everybody tells you doesn’t make sense. You never know what’s going to happen. But it was kind of the same thing with American Idol. I didn’t know what was going to happen. It ended up being so fulfilling for my life. This is just another one of those things,” he explains.

Archuleta says it was with the very same trepidation that he took on his hand at acting here in the Philip-pines. While he has already appeared on shows like “iCarly” and “Hannah Montana” playing himself, his role in the TV5 serye as international artist Josh Bradley is his first time actually acting as a character.

“I was very reluctant because I didn’t know what this experience would be like. I would have to go out and be such a long way from home for such a long time. It was something that I’ve never done before,” he says. “But TV5 was always very open and easy to work with and they made things very easy and comfortable for me. It just showed even more when I arrived here.”

That arrival back in January was the beginning of what would be almost two months of acting workshops, recording sessions, and shooting scenes in Metro Manila.

Being a newbie actor working with far more seasoned thespians presented a lot of challenges, not the least of which is the fact that he had to interact with them in Filipino – a language he only knows bits and pieces of.

“Coming into it I was very nervous since I’m not an actor. It’s a job that I don’t really know how to do. They tried to keep the Tagalog words as simple as they could so it could sound natural. It was a challenge be-cause the rest of the cast most of the time would be speaking in Tagalog and I would respond in English for the most part. It was a challenging experience,” he shares.

Doing the serye, says Archuleta, opened his eyes to an entirely new way of expressing himself, and is something that he intends to pursue even further after he has served his time as a missionary for the Church of the Latter Day Saints.

“I do lay myself bare to an audience when I sing, but it’s in a different way. Acting and singing are very similar in that way where you become very vulnerable and you open yourself up and express an emotion,” he explains. “I’m not the best actor out there. But I can’t wait to keep growing. It’s so much fun and a lot of work. I think that if I keep on working on it I can get better, because it’s just a great thing to share with people.”

More than just opening up new avenues for artistic expression, Archuleta says that his months-long stay in the country has p r e p a r e d him for the r igo r s o f missionary life. A rigid set of rules a r e i n p l a c e for Mormon missionaries, who are encouraged to limit their phone communication with their family, dress conservatively at all times, and stay away from television, movies, the Internet, and most secular music.

“The fact that I’ll be going on a mission, it’s nice that I’m here, in a way. It’s taught me a lot about myself as a person as well. I started to get more out of my comfort zone. This is the most difficult thing that I’ve done and it was great to take on the challenge,” he shares.

Fans also shouldn’t worry about him disappearing from the scene while he fulfils his obligations to his church. While here, Archuleta says he has written and recorded songs that he hopes will fill the space that he is going to leave behind.

“I’ll be gone for two years, and I don’t want to leave my fans with nothing. I just feel like it would be so disrespectful after all they’ve done to support me,” he says. “I want to make sure that the songs will be there. Even though I’m not here physically for my career, I still want to have the music there.”

His two year absence may cast a long shadow of uncertainty on his artistic career, but Archuleta says it something that he is ready to face.

“This is a decision that took a couple of years to make and finally make happen. Even though it’s scary, I know that it’ll be worth it. I’ve learned to trust that feeling in my life. I just have to keep following that feeling,” he declares.

This entry was posted in Special event and tagged David Archuleta, Nandito Ako. Bookmark the permalink.