David vlogs about Beyoncé: Year of 4

So this is the Beyoncé: Year of 4 documentary David mentioned watching in his vlog. … And this is what he said about it: 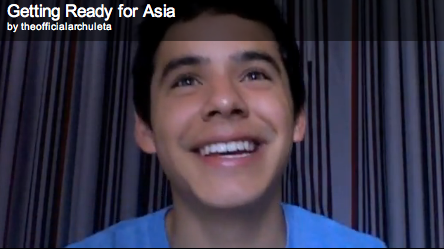 “This morning I was just looking on YouTube and there was this little Beyoncé Year of 4 thing and I thought ‘Oh maybe it’s a video or something,’ but it was kinda like a little documentary and it was soooo cool just Beyoncé talking about her experience and how she’s out on her own and stuff and how she kinda split ways and trying to learn … how she’s learning the hard way but [claps] the good way too, you know?

“I don’t know, I just kinda really gained respect, even more respect for her and what she does and what she’s tryin’ to do …

“It’s hard, it can be overwhelming in a lot of different ways trying to get everything together. It’s amazing how something’ll be just a four minute video or a four minute song and soooo much work goes into all of that…

Now, I don’t always check out stuff that David talks about during his vlogs … okay, that’s a lie, I pretty much always check stuff out … but I really wanted to find this video.  (Which wasn’t hard because the amazing admins at the new OS posted a link to a shorter version that linked to this version.)

Why did I want to find it? Partly because I’ve always seen comparisons between David and Beyoncé. … no really, not kidding.

Not that we’ll see David recording dance tracks or busting out sweaty choreography anytime soon, but I’ve always admired how Beyoncé, although part of the pop “royalty,” has remained genuine, serious about her craft, and always, always a class act.

I also loved hearing about the dancers Beyoncé “discovered” on YouTube and how they “couldn’t help” but start dancing. Hmm, who did that remind me of? 😉

So what do you guys think? Why do you think it made such an impression on him? Are there parallels here or am I (in the words of Adele) chasing pavements?

This entry was posted in Fan experience and tagged Beyoncé, David Archuleta, Year of 4. Bookmark the permalink.

7 Responses to David vlogs about Beyoncé: Year of 4