I don't take great pictures but with this subject, it's tough to take a bad one. (I heard the Provo Fashion Police gave D. a commendation for this outfit.)

I have a feeling David Archuleta will write an amazing song someday called “Home” … or “Sort of Home.” 😉

Maybe he doesn’t need to. Maybe the look on his face and the sparkle in his eyes on stage at the Stadium of Fire extravaganza last night said it all.

He looked even more glowy than usual (if that’s even possible… if that’s even a word) and kissed by the Utah sun (which was BLAZing hot) and happy to be home – he even said so. 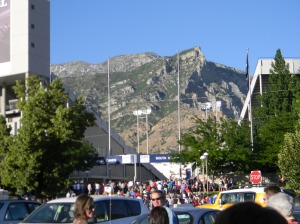 I mean, come on, can you believe these mountains?!?!?!

I’m sure you’ve all seen the videos of how great he sounded. But I doubt they capture the impact of the setting. I could barely take it all in myself. The stadium is enormous, holding 50,000 people and it looked full to me. It’s surrounded by a truly magnificent mountain range that the more you stare at it, you swear it’s moving closer.

The last time David sang there, he was 12 and to be back looking out at all those people and those mountains as an adult singing songs he wrote from albums he created, must have been such a powerful, emotional experience for him. (And when they started the anthem with Star Search David on the JumboTron then 2011 David walked out amid the choir it was a surreal experience for us, I can’t even imagine what it must have been like for him and his family.)

Parachutes & Airplanes: A bunch of these high-flyers zoomed across the sky and landed in the middle of the field ... very thrilling!

As only David can do, he took all those feelings and channelled them into a national anthem so powerful, my eyes welled with tears. Not because (as much as I love my neighbours to the south) I have any emotional attachment to the song. (Heck, I rarely get choked up at my own anthem.) But no matter what country you call home, when David gets to “and the rockets red glaaaaare,” you can’t help but feel the pride and love and loyalty David pours into that song well up in your own heart.

I’m sorry to say the rest of the show is a bit of a blur. It’s just so amazing to be sitting there listening to that Voice live and seeing David up on that stage that I can hardly believe it’s really happening. I do remember flashes of amazingness though:

I just want to steal this moment right away from time: I so wish I'd gotten a shot of the whole stage filled with dancers surrounding David. E.p.i.c.

As much as David’s set felt oh-so-short at five songs, I felt incredibly proud to be his fan when he devoted his last song, not to plugging his album, but to singing a special patriotic medley he’d prepared for the troops. (The headliner didn’t even do that … just sayin’.) And what’s even more amazing is that I don’t think that surprised a single one of David’s fans … as we all know, that’s just David.

Beyond the amazingness of hearing David live in that spectacular setting, along with some of the most stunning fireworks I’ve ever seen, I think my highlight of this weekend was getting to meet a young medical student from Taiwan who flew in to hear David sing live for the first time.

And more than that, to see how the David fan community came together to welcome him with open arms. About a month ago, when the lovely Gengen tweeted that her friend (a huge David fan) was flying into Utah for the show and requested we look out for him…  I don’t think even she could have predicted what would happen upon his arrival.

Fans spontaneously volunteered to pick him up from the airport, show him the SLC sights, then introduced him to as many other fans as possible, took him to the show, introduced him to a couple of the band members and took a picture I’m sure he’ll treasure, offered him a place to stay and a ride to the airport today to fly to Paris to meet his dad.

I’ll never forget the smile on his face as he left the fan gathering after the show, his arms filled with gifts and a straw cowboy hat on his head (a gift from a complete stranger sitting near him at the show) as he waved goodbye to us all, saying, “I love you guys!!!”

Happy Fourth of July to all who celebrate it!!!!

p.p.s. My one lame attempt at a video … sorry for the shakiness but I must admit, the sound isn’t too shabby. Enjoy!