More info:
At the Auto Club Speedway in Fontana right now! Wanted to let you guys see the track while the racers get ready for the Royal Purple 300 as well as the Sprint Cup tomorrow. Had such an AMAZING time riding the Goodyear Blimp! Thanks so much to Goodyear for the experience. 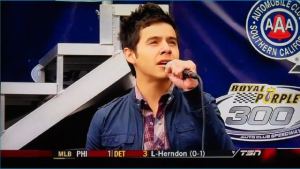 Wow, I am on NASCAR overload right now. That vlog? His face at 2:22 when he searches the sky for his beloved Goodyear blimp?? That anthem??? The buzz???? … oh, wait, apparently there’s some sort of car race that goes on too … anyway, scroll below for just a sampling of the twitter frenzy that erupted after David sang the Star Spangled Banner. I can’t believe I get chills right up to my earlobes and my eyes start to well with tears for another country’s anthem … that’s the Power of the Archuleta! 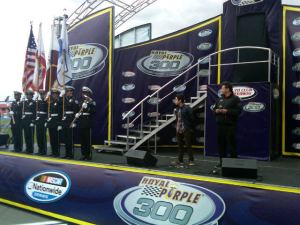 @kathryngx14: Omg. I gotta record the beginning of David Archuleta’s anthem. The girls that screamed when they announce his name…I laughed so hard.

@brian_fletcher: From those 14 year old girls shrieking, I couldn’t tell if David Archuletta was singing the national anthem or listing puppies.

@chelsearaehall: @99_AflacRacing did you hear the screaming for David archuleta? I didn’t know that many 12 yr olds went to NASCAR races

@sammikns:…Meanwhile, I’m twenty, a Nascar fan, and would scream for David Archuleta as well. So what 12 year olds? @chelsearaehall

@RichBohr: Did you hear all the girls scream when they said David Archuletta’s name! lol #NASCAR

@njnauman: David Archuleta is singing the national anthem at the race today…I loved him on Idol!! #pumped

@CassandraMcKown: oh good lord you could hear the girls screaming when they announced that david archuleta is singing the national anthem for the race.

@RichBohr: @jjyeley1 My ears are ringing after the high pitch scream of the girls that sreamed for David Archuletta. lol

Rumour has it: David's starting his own Goodyear blimp fansite (called the Snarky Blimpies).

@MuseicalEP: @DavidArchie Excellent job with the National Anthem today! Are you available every weekend? Enjoy the race! 🙂 #NASCAR

@Nascarfan_21420: @DavidArchie Wish I was there, but watching it at home. U did a great job singing the National Anthem. Have a great time. 🙂

@MelissaM88: IDK who David Archuleta but, he did a helluva job on the National Anthem. #nascar

@ElisseMayo: @DavidArchie you sang the national anthem so incredibly amazing..

@nascarchick_3: i think @davidarchie should sing the national anthem again this year! 😀

@ShannonGilhooly: @DavidArchie I skipped going out just to watch 55 seconds of you on the television. You’ve got a dedicated fan on your hands sir =)

@josieatwood23: Wow @DavidArchie you sounded fantastic singing the National Anthem for NASCAR! You looked good too!!

@betseybydesign: i loved david archuletta’s anthem–he did a lot better than i thought he was gonna’ do!!:)

@blakebraceface: i have a man crush on david archuleta

@dexterdame: @Buffythecat David someone-runner up a couple of yrs ago at AI. He did a good job-color me pleasantly suprised! 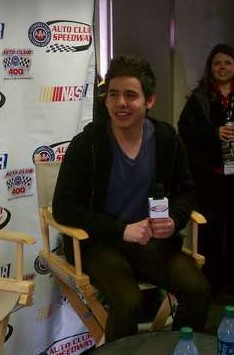 @sammikns uhm: @jeffgordonweb, please convince @nascar to bring David Archuleta back to sing the Anthem at a Cup race someday? :).

@matt_castillo: @DavidArchie You sang so beautifully :]

@FKayeNASCAR: I don’t think I’ve ever heard fangirls screaming before an anthem. #nascar

@TheVoiceDA: Text from djafan (she’s at NASCAR) “…he’s watching now. He rode the first lap with grey cars” / from ITTO88: He rode on the back of one of the convertibles during driver introductions.

@striegle: Great anthem today by @DavidArchie & always enjoy a flyover! Especially for Nationwide. Probably the best anthem for the series I remember

@ZontarLives: @DavidArchie GREAT JOB DOING THE ANTHEM!!! SO NICE TO SEE YOU TODAY! Thx for the great performance. Love ya Bro!

@mandm731: @davidarchie beautiful job with the anthem David!! Your voice is untouchable 🙂

@MsTorisMommy09: @DavidArchie aww ur so freakin cute and ur eyes are beautiful im so glad u had fun!! I wanted to go see u sooo bad today but i couldn’t = (

@NShoutNfans: Wow I just saw @DavidArchie sing on ESPN that was amazing!

@Brooke_Smith9: Wow! Best anthem of the year from @DavidArchie. I wish he sang the National Anthem before every race!

@paolaure: Omg @DavidArchie was sooooo goood and he looked nice and his voice was amazing:)

@ikisstheground: Beautiful job on the national anthem at the NASCAR Nationwide race, @DavidArchie! 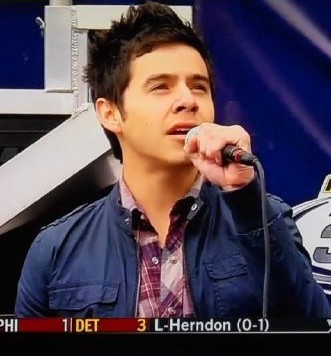 @jeff_gluck: David Archuleta doesn’t know any of the drivers, nor does he have a favorite. “I’m just impressed by whoever shows their skills,” he says.

@tracyg619: Doing homework at home while my uncles watching Nascar. suddenly i hear @DavidArchie singing the National Anthem. my day has been made! =D

@IndySkye: Christina Aguilera and others should listen to how @DavidArchie sang the national anthem today. That’s how you make magic.