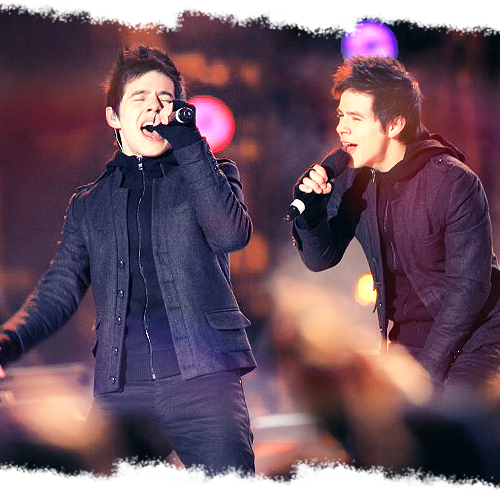 As you know, David Archuleta will be performing two songs as part of NBC’s Skate for the Heart telecast this Sunday night (4-6 p.m. ET) — one of them (MKOP) while Olympic bronze-medal skater Joannie Rochette skates.

Since Joannie is practically more beloved in this country than Tim Hortons, I posted the MKOP sneak peek video on Facebook. Shortly afterward, a friend commented, “He must be reeeeeeeally short, Deb.”

Seriously? That’s what she noticed? Not the incredibly beautiful song? The gorgeous skating, even? That VOICE??? I don’t get it.

Yes, David is a smallish guy, he looks young, he is young. Can we not move on?

You know what else I don’t get?

Someone tweeted a link to Josh Grobin singing “Voce Existe Em Mim” on Jimmy Kimmel Live. No offense to Josh but it was just awright for me (to quote Randy). I didn’t think it held a candle to Contigo en la distancia or The Cat and Mouse Carol – and yet it garnered more than 75,000 views in just 10 days… wait, actually I do get that. Josh is a huge star, lol, so nvm. 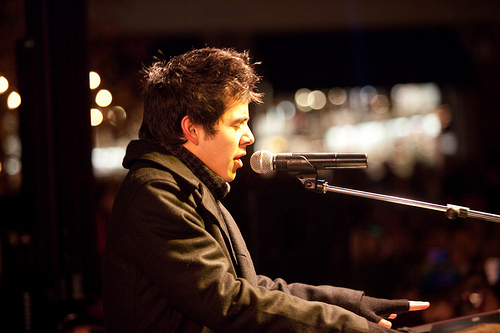 Son, can you play me a memory? I'm not really sure how it goes. (Photo: spacequarterly.com)

Okay, another head-scratcher? Kari Sellards, who works with WEG Management as David’s tour manager tweeted this yesterday, “Hey all you Archies out there. I know a lot of you will go anywhere to see David but I am doing a survey to see where you all live. Just tweet me back with you name, city and state!”

Trouble is, she only had about 525 followers at the time. Not exactly a representative sampling. Some fans have double that. If that’s the scientific testing being used to determine where to tour, we’re in trouble. How about looking at the response to previous tour stops? Or getting David or his official Facebook to send out the call to action? (… of course, if she was just looking to boost followers (cynical, I know) it was genius! She now has over 700.)

One thing Kari and her colleages don’t seem to get is that there are so many fans who voted for David on Idol and then lost track of what happened to him (thanks to zero promo) — in fact, I’ve met many of them at shows. On the solo tour, quite a few didn’t even know that he had an album out. And again, this fall, a bunch were unaware he’d released anything post-Crush.

I truly believe that as long as a concert gets enough publicity, these fans will come out of the woodwork to see David. Why does no one on David’s team — including the man himself — seem to get that?

Tickets for this CHUM-FM event sold out in a record 15 minutes. *hints* (Photo: JustJaredJr.)

David seemed baffled at the crowds that came out to his COS book signings, flummoxed that he hadn’t been forgotten. This seems to be a recurring theme. In fact, I came across the blog David posted after the CHUM Christmas Wish event in Toronto, and could hardly believe what I was reading:

“On Monday we went to Toronto, Canada! It was great going back to Toronto, and we ate at a Southern Italian restaurant there. I’ve never had *Southern* Italian food, but it was delicious. I then did a performance Tuesday for CHUM FM of Crush where I accompanied myself on piano. It was actually the first time I had ever done that for an audience haha, so it was exciting. And thanks everyone for coming to the shows! It’s so great to see the signs and familiar faces. I wasn’t sure how the performance in Canada would go, but it was just awesome to see the turn out.”

Kinda broke my heart. David, David, David — please accept that your fans LOVE you and — even the ones who don’t necessarily have full-blown ODD — they just need to see and hear you or at least find out that a concert is happening and they will flock back to you like swallows at Capistrano.

Something I do get, strangely enough, is this line in a blog I came across from a Vancouver university student writing about the music she’s listening to right now:

“Falling Stars, Something About Love, Who I Am all by David Archuleta – i don’t care if he is like a male grandma, or that he is more for teenagers, I like his songs!!! still better than Justin Bieber right?! Oh please I hope so..”

… how about you guys? What have you been scratching your head over lately?

This entry was posted in Fan experience and tagged David Archuleta, Rants R Us. Bookmark the permalink.